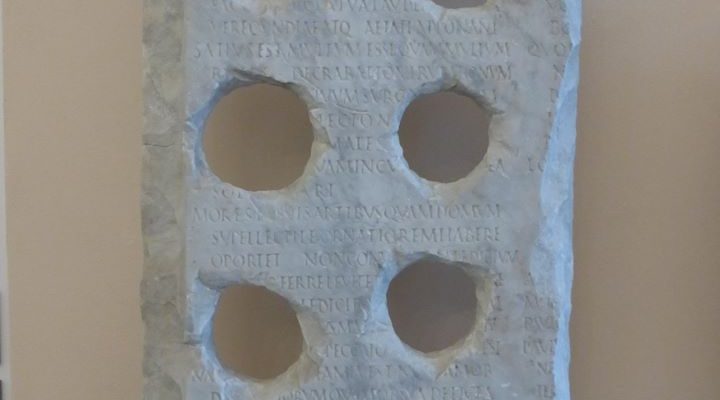 Day 51 – On Tuesday of week 8, the fellows of the City of Rome walked along the Via Salaria to the Mausoleum of Santa Costanza. This tomb for the daughter of Constantine sits high on a hill and still houses some magnificent pieces of mosaic artistry. The building is circular and in the concave ceiling that runs above the internal portico, there are mosaics of portraits, amphora, animals, foliage and geometric patterns. The tesserae are small, the patterns complex and the use of polychromatic tiles provide depth and shading. On top of these works of artistic merit, the mosaics follow the curves of the ceiling both in the concave niche and the circular tunnel effect of the portico. Beautiful pieces, not to be missed. 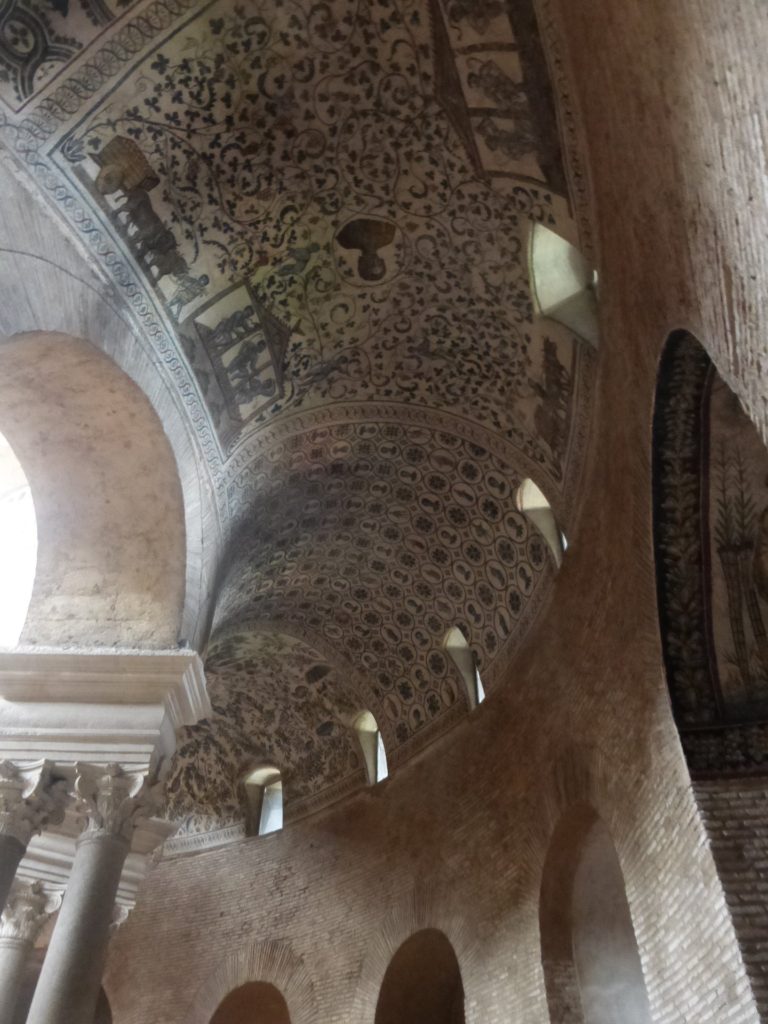 From the dizzying heights of mosaicked ceilings, we headed deep underground into the Catacombs of Priscilla, named after the ancient patron who financed the construction of the site. The paths and graves descend up to 15 metres below the street level and comprise of two floors. Each floor has narrow labyrinth-style passages that are lined with niches of various sizes and shapes cut directly into the bedrock walls. The bones have largely been removed (by later Christian explorers searching for holy relics) but the sense of community is still clear by the sheer amount of resting places and the remaining frescos. The paintings on the walls show early images of Christianity which clearly derive from (the still contemporary) pagan allegories and display a faith-based on resurrection and piety. Sadly, photography was not permitted in this area.

Climbing back up to the modern street Amanda and Niccolo led the group to the aqua virgo, a still accessible natural spring which sits below an exhibition of its discovery and ancient and modern uses. On the level above the lies the Neronian Insula of Vicus Caprarius, above which further exhibitions reside. The insula sits far below the modern street level as the architectural remains of stairways, living quarters and bathing rooms. The area is small but worth a visit and rounded off our Tuesday well, before we raced back towards the BSR for a Public Lecture on Pirro Ligorio and the Roman Aqueducts by Ginette Vagenheim of the Universite de Rouen-Normandie. 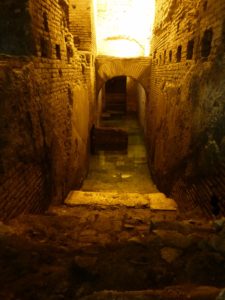 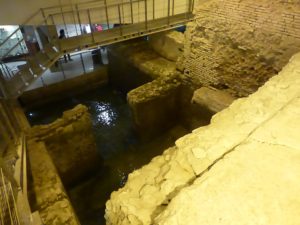 Day 52 – Wednesday was Museum Day and so the City of Rome group headed out to the Museo Nazionale Romano: Crypta Balbi. This archaeological site boasts the ruins of shops, living quarters, water sources and a rather impressive 9-metre section which shows the stratigraphic collapse and repair of Roman streets and foundations. Sadly the still paved Exedra and Mithraeum were under conservation and so closed to our access but the overlaying museum housed some interesting items. It had, for example, fragments of the Forma Urbis (although the location of the bottom two pieces in the exhibition needs reassessment), a large collection of inscribed pots and some unusually formatted epigraphic pieces. 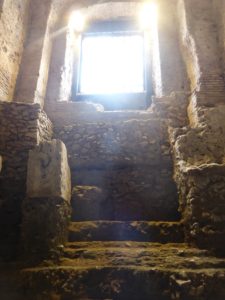 After learning all we could from this ancient theatre complex we took a picturesque walk through the antiquity riddled courtyard of the American Institute back to the BSR for Christopher Siwicki’s (BSR & University of Exeter) Public Lecture on What’s Greek About Roman Architecture? Attaching Labels to Buildings in Imperial Rome.

Day 53 – Thursday we headed beyond the walls of the Eternal City to the stunning landscape of Tivoli. Beginning at the Temples on the Acropolis we listened and took notes to the history and architectural details of the round and rectangular structures given by Amanda and Niccolò respectively. The tall fluted columns set against the backdrop of rivers water falling down forest paths was a sight to behold and I highly recommend a visit. The town itself is a lively bustle of orange stuccoed houses and elaborate churches with plenty of bars, restaurants and artisan shops. 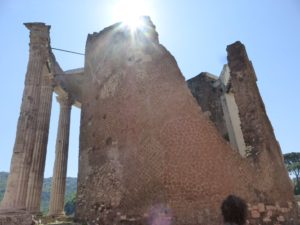 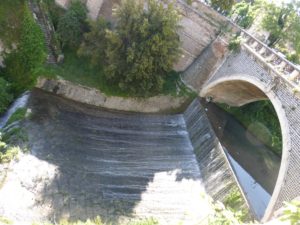 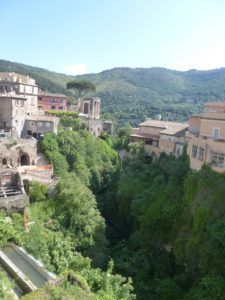 From the temples, we travelled further up the mountains to the Sanctuary of Hercules Victor which offers a panoramic view for miles across Tivoli and Rome. Offset by the more modern ruins of workshops from the industrial era this site boasts a long history and is still used for concerts and re-enactments. As with all these sites, an associated museum was nearby and it had a refreshing mixture of contemporary art, theatre and ancient sculptures. A clever layout of old and new comprised of Venus figurines, Greek inscriptions, Roman sculpture, abstract art and satirical films. Definitely worth a visit but don’t be fooled by the so-called Sulla statue…

Further up the mountains, we climbed to reach the huge area once covered by Emperor Hadrian’s Villa. This site was fantastic. It is hard to appreciate the full scale of this complex in architectural design, aesthetic effort and physical dimensions without seeing it first-hand. After many hours of exploration of columned porticos, marbled courtyards, dome-roofed dining rooms, mosaicked bathing areas, large entertainment spaces, gardens, painted living quarters and the epicentre island of Hadrian’s personal dwelling there was still much to see. The ruins are tall and wide showing different phases of construction that complement the variety of arts and decorative elements seen throughout the villa. The area is green and picturesque and there are various high points where 360 panoramas show the distant mountains and towns around and below. This is a place I shall definitely return to. 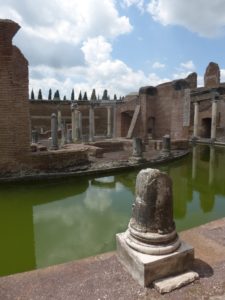 Day 55 – Friday was a day off and so our final exploration day of week 8 was a delightful return to the Alban Hills. This time the group travelled by Mini-Bus to Lake Nemi a place I have wanted to visit for some time. This dark and deep lake is shrouded in mystery and the first stop of our tour was to the shipyard museum. Here a 1940s fascist building had been re-utilised as a storehouse for the remains of ancient ships and their carried goods which had been found during excavations of the lake. The wrecked ships were carrying marble and other stone goods both finished and unfinished, foodstuffs, jewellery, votives and stele. 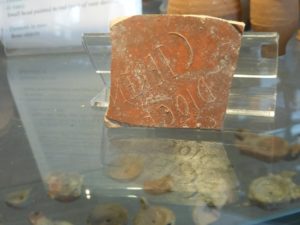 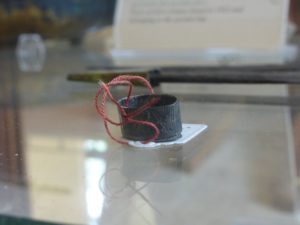 From the shores of Lake Nemi we ascended to Grottaferrata to the Museo dell’Abbazia, a delightful museum housed in a beautiful courtyard belonging to a church. Coincidently the church was hosting the wedding of a lady in a bright red dress and a police officer whose entire squad seemed to have turned up in support. The museum exhibited a variety of friezes and stonework from the local area, including an impressive complete archway. The finds came from a range of periods from the 1st century BCE to the 7th century CE and it was interesting to see some clear development of localised typologies. 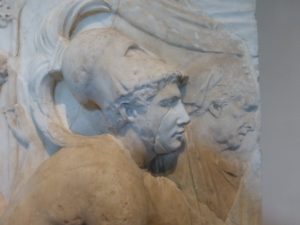 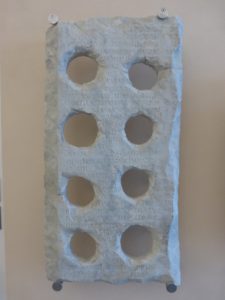 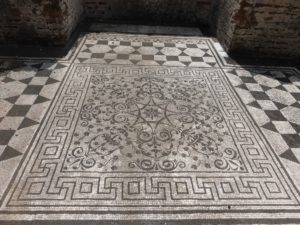 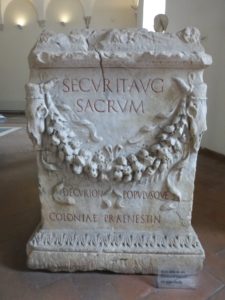 Onwards from the courtyard of kumquats, we travelled further still up the mountain until we reached the very top where the impressive Sanctuary of Fortuna Primigenia still remains. Sitting high above the town from the steps leading to the upper terrace you can see beautiful views for miles. Inside the top three floors of the sanctuary, there are displays of sculptures, inscriptions, funerary monuments, mosaics, small finds and quoted complaints about Sulla. Climbing down the ancient temple steps, past the well, we descended through the windy cobbled streets of ancient Praeneste towards the lower terraces. On one of the middle levels sat a large church, underneath which were more remains of the sanctuary where the foundations of the Christian building had incorporated both Roman columns and 19th-century kitchens of the Pope. Outside the ruins lay some of the most impressive mosaics I have ever seen, above which, loom six 30ft 1st century BCE columns within which the holes for the supporting structures of the later 19th century walls can be seen. The hours of the day were sadly against us and this is a place I must definitely return to. 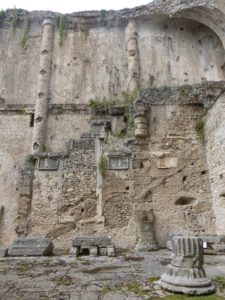 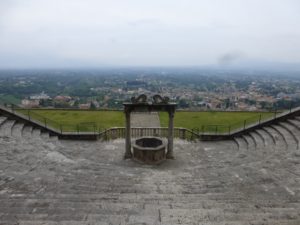 The final few days are almost upon us…