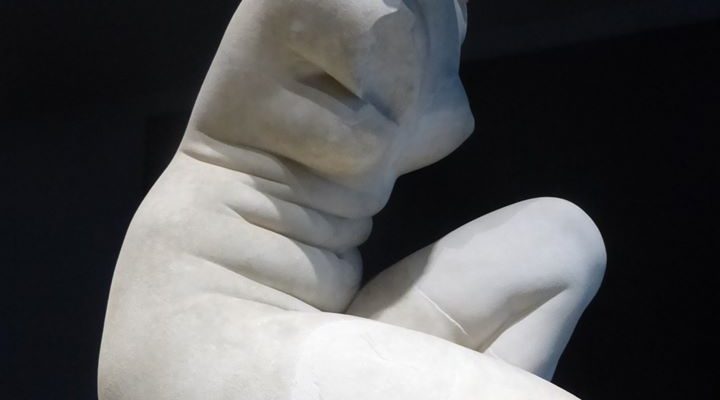 Day 43 – Trastevere is an area of Rome that sits on the opposite side of the river Tiber to the centre of the city. It is filled with orange stuccoed buildings, random ruins and columns, bars, restaurants, churches and shops. For the City of Rome cohort, we arrived at the Excubitorium of the Vigiles on Via della VII Coorte for a guided tour around an ancient building that seems to have been in use from 2nd century BCE – 2nd Century CE. From the 1st Century BCE the Excubitorium, or fire station, offered shelter, water access and dormitories to the firemen who prevented and doused fires and supervised the torches lit in public places. Sadly the area has been subject to much theft from sculpture to mosaic to columns, but the foundations, walls and star-shaped fountain have been preserved. With the custodian’s help, this fairly neglected site will be restored, published and eventually reopened to the public. 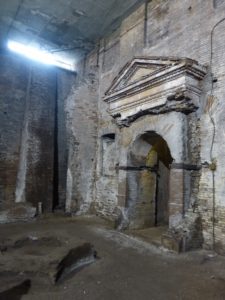 From the Excubitorium, we walked through Trastevere to Santa Cecilia, a church (which like many of the churches in Rome, has excavated its foundations looking for relics or the building’s origins) with extensive Roman remains beneath it. A strange combination of inscribed marble fragments, in-situ mosaics and hidden modern Christian chapels sits amongst the upper levels of the church’s crypt, which were once Roman houses. There are sarcophagi from the early Christian and late Roman periods which an interesting mix of similar imagery. 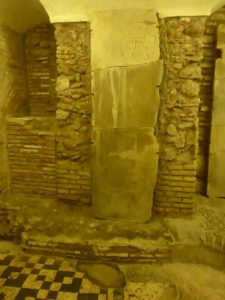 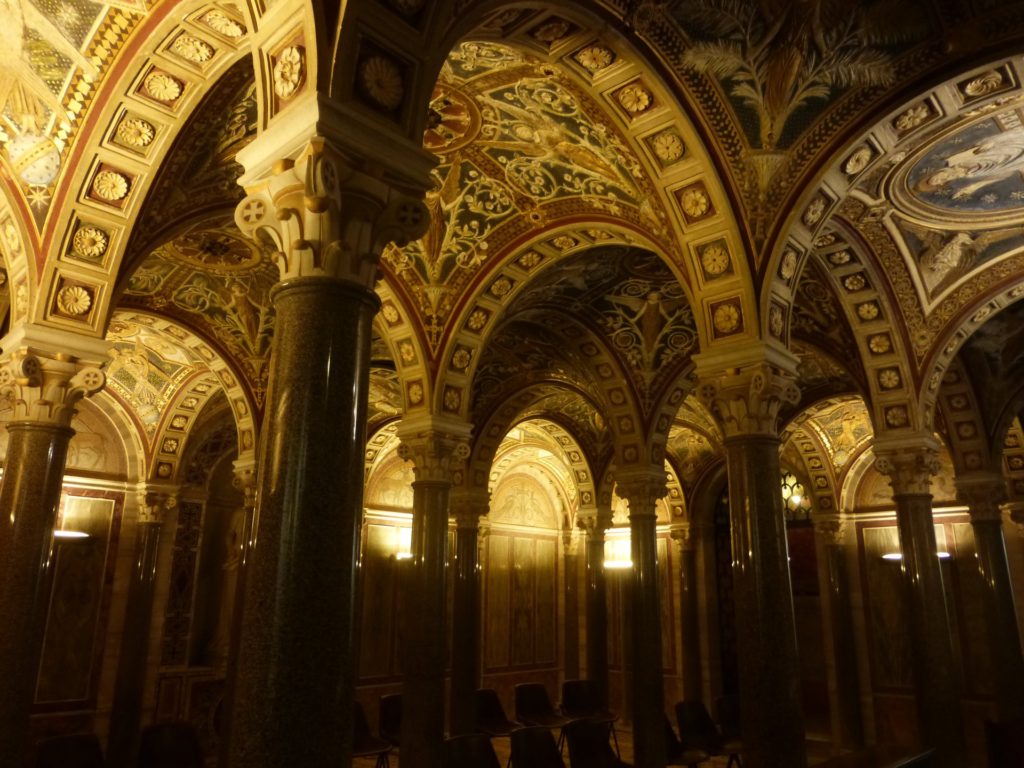 On the way to the Syrian sanctuary on the Janiculum, we popped into Santa Maria in Trastevere to have a look at the Roman columns, bases and capitals which are displayed in the nave. Sadly the Syrian sanctuary was closed (despite pre-booking) and so that will have to be added to the next Rome visit.

Day 44 – Tuesday was the final day in the Roman Forum, this time concentrating on the Christian and Medieval periods of the site. We started with the Arch of Constantine which is a monument I have a lot of interest in. The different materials, styles, messages and symmetries must have been very impressive. We looked at each panel I detail, learnt about its history and the debates surrounding its purveyed messages. After an enjoyable discussion of the arch, we carried on the trail of late and post-Roman architecture, including the so-called Temple of Romulus (which is more likely to be the aforementioned Tomb of Romulus at the Circus Maxentius and this another temple), the Basilica of Maxentius, Vicus ad Carinas which led up to Santa Maria Antiqua, The Oratory of the Forty Martyrs and the Domitianic ramp. The latter is fairly easy to miss if you are based on the central road of the Forum but it is worth the steep climb for the stunning views of the whole Forum. 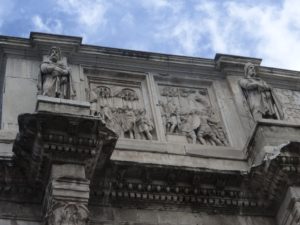 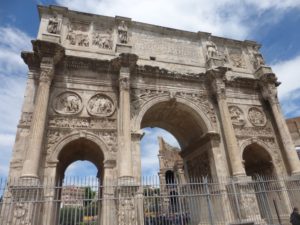 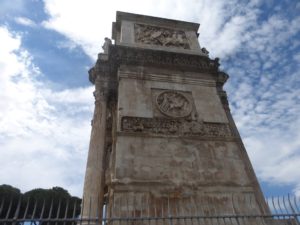 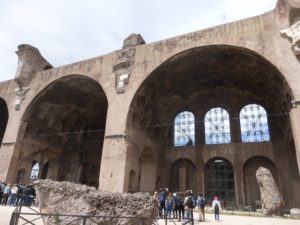 Day 45 – On Wednesday we went to Palazzo Massimo a museum that is part of the Museo Nazionale Romano cluster. Housing famous portrait sculpture of Augustus and Hadrian amongst other ancient people, the museum houses a vast collection of paintings, sculptures and friezes across four floors. One floor not to miss is the preserved Roman frescos which are carefully displayed in rooms, alongside mosaics made from the smallest tessera. The detail, time and skill to make these pieces of art can not be ignored when you spend a moment examining the images. 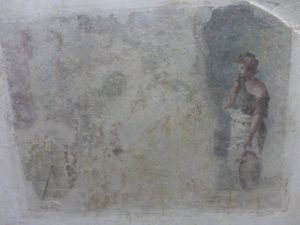 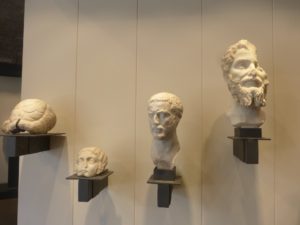 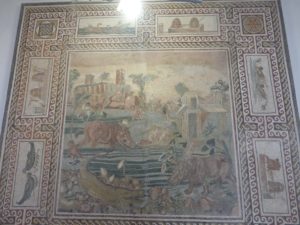 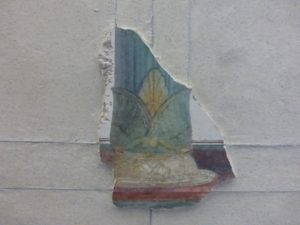 After the museum, we returned in the late afternoon for the evening lecture on False Vaults in Roman Architecture: Origins and Variations by Lynne Lancaster.

Day 46 – Thursday took us to Rome’s Maritime Facade. Heading out to Portus we stopped at Isola Sacra. This area of tombs, mausolea, columbaria and graves was truly impressive. From the humble to the extravagant much effort and thought had gone into these monuments and the preservation of them leaves a potent mark on the landscape. Highly recommended.

Onwards to Portus our tour of the excavations was sadly cut short as certain areas of the Imperial Forum were closed off. We did climb up to the view of the hexagonal harbour from the top of the horrea however and if anyone was interested in this town, I recommend the Free Futurelearn course on Portus that runs regularly.

Day 47 – On Friday we travelled out to the Villa of Livia in Prima Porta to see the ruins of baths, atriums, garden rooms, columns, frescos, mosaics and some impressive pilae stacks (for heating floors). The garden allowed a panoramic view of the distant Alban and Sabine hills (mountains) and what would have been the plains that stretched out to them. As a stop off on the way back the group headed back underground to the Spring of Anna Perenna. This deity personified rebirth, ends and beginnings and was especially associated with the old year turning in to the new. Built into the wall of a Roman fountain were earlier marble dedicatory inscriptions to this goddess, whose story involves her hiding in and coming out of a river. It was a nice place with a helpful custodian too, the ruins showing that tantalisingly, there was more to be found beyond the limit of excavation (found due to a car park being built). Our final stop of the day was at the villa ruins between two of the auditorium buildings at Parco della Musica, which boasts a beautifully symmetrical building added to between 1st century BCE and 2nd century CE.

Day 48 – Saturday led us to the Via Ostiensis – the road to Ostia – where we explored inside and out the Tomb of Cestius. This monument is fiercely recognisable by its pyramid form and I admit in the flesh, it was much larger than I thought it would be. A towering white marble triangle set into the lower roman road and inscribed on each side clearly marks this tomb as one of prestige. It isn’t clear why Cestius chose this particular shape but it may have had something to do with his involvement in the Augustan led interventions in Nubia. Inside, sadly, the room, once sealed with no door, has been tunnelled through and stripped. The walls however still hold traces of eloquent paintings that show figures, prosperity and light. In close proximity to the pyramid, there is a small museum at the Porta Ostiensis (city gate) with some inscriptions and details of the post-Roman uses of the Porta. 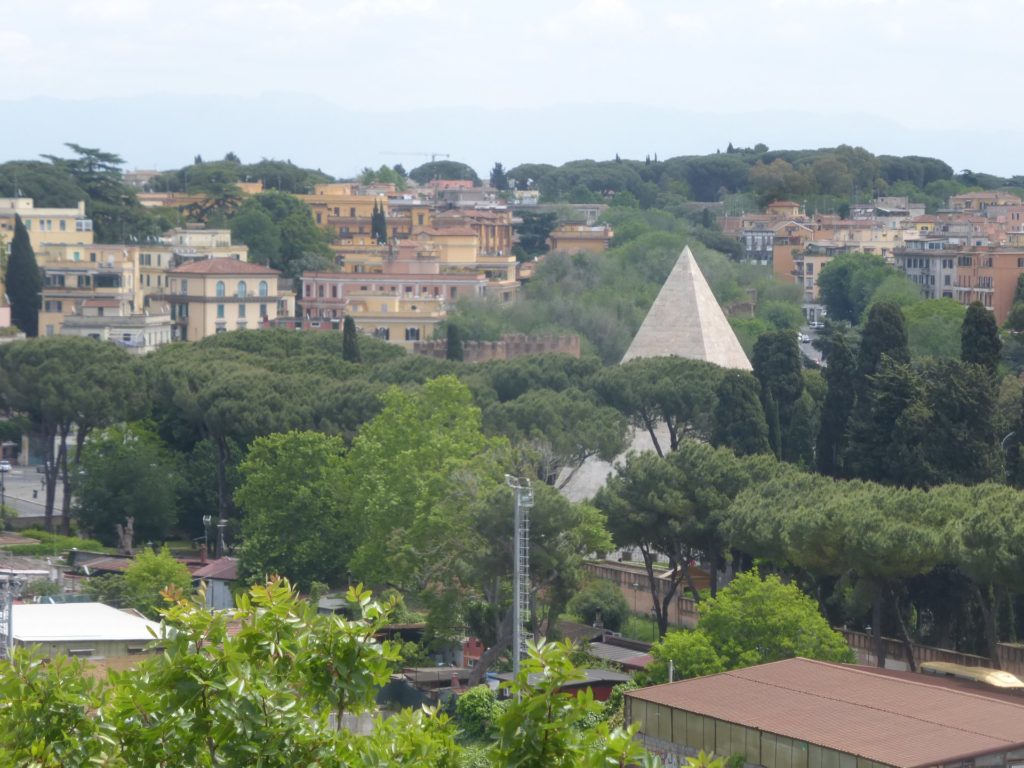 After this, we headed towards the Centrale Montemartini. This unique museum has a remarkable collection of ancient sculptures and funerary monuments but all set against the backdrop of industrial renaissance-age power generators. It makes for some brilliant photographs! A definite must for those wanting to see good museums in Rome. 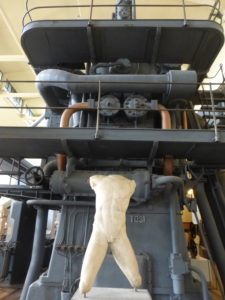 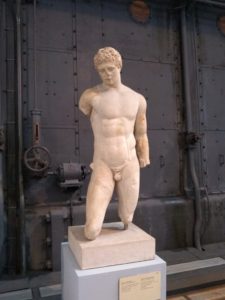 Day 49 – Last but not least Sunday was not a day off this week and so we headed out to the final fourth of the Museo Nazionale Romano Quartet: The Baths of Diocletian. Here the ruins stand up to 23 metres tall in places, with marbles flooring, niches for statues and a complex system of heating and rooms for bathing, leisure activities, medical attention and exercise. Attached to the ruins is a museum with examples of columbaria, Roman building techniques, inscriptions and of course, sculpture. There is a particularly nice collection of unusually decorated sarcophagi and mosaics. There is also a hollow alabaster sculpture of a young boy on a horse that has miraculously survived and makes you wonder how many other sculpture types we just aren’t aware of. Sadly…my camera battery ran out.

The days are speeding up now and I am not ready to leave. This week started at Via Salaria and I will publish this post soon…