Apologies for the delay on last week’s update! It’s been an intense few days! Week 6 will be out this weekend like normal.

Day 30 & 31- During our time at the BSR, we are expected to carry out a research project, the title of which was proposed as part of the original application. The project is judged on the collective success of on-site presentations, talk on your chosen project and an extended essay to be handed in at the end of the programme. In light of this, days 30 & 31 were set aside for each awardee to give a 20-minute presentation on their project topic, with 10 minutes for questions and feedback. All of the presentations went well, with some very interesting questions being addressed. My own project will be called: Bakeries at Ostia: A Spatial Analysis. This paper will address the role of bakeries in the micro-societies of Insula blocks by considering the spatial context of three bakeries as case studies and how they, in turn, fit into the wider context of Ostia Antica. For those who are interested in this topic, I will be posting the piece on Academia upon completion.

After the last presentations on Day 31, we had a seminar by Niccolo Mugnai on Latin Epigraphy and it’s language on funerary inscriptions.

Day 32 – After the presentation days, we headed back outside towards the absolute wonder that is Ostia. Those of you that read my previous blog on Ostia will, perhaps, not be surprised to hear that I was very excited to return. I was, however, expecting to be a little less impressed on my second visit. I couldn’t have been more wrong. Before we reached Ostia we stopped at EUR and visited the Museo dell’Alto Medioevo which sits in a curious area of buildings very much adhering to the fascist-style (imposing squares with big empty windows and little decoration apart from the occasional gargantuan statue which one might say is a by-product of overcompensation…). The Museum houses an interesting collection of finds, especially those with high levels of organic preservation and I would recommend it to anyone studying the post-Roman periods or with a particular interest in weaponry. Amanda (Claridge) and Niccolo had led the group here to specifically look at the ruins of a building which had been found outside Porta Marina and then relocated to the Museum and reconstructed as a display underground. The display showed opus sectile decorations of lions, human male portraits, tigers, gazelle, antelope, grasses and flowers in an unusual style of marble decoupage, which must have been even more impressive when complete. My particular favourite pieces were the sad octopuses which were kept in a separate cabinet, their original position within the building’s decoration being unclear. 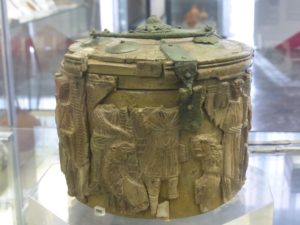 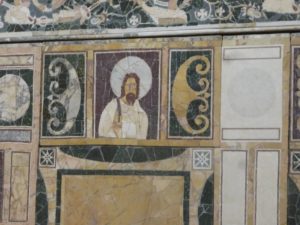 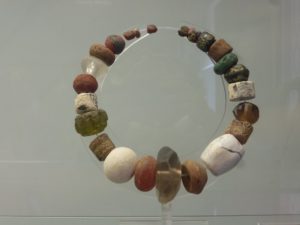 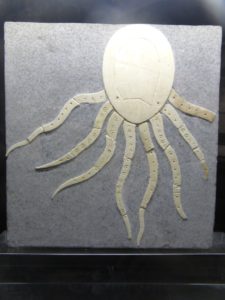 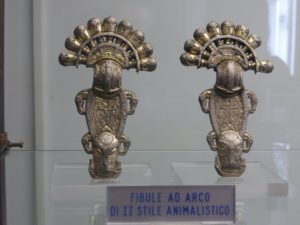 Once we had visited the Museum we headed out on the train to Ostia Antica, this time to focus on public and funerary buildings. We started on the Via Maximus and wandered amongst the family tombs and mausoleums that line the road. We proceeded to the Necropolis of Porta Romana, the Baths of Neptune, Caserma dei Vigili, the theatre and the piazzale delle Corporazioni where all the merchants of traded goods had their guild houses. From there we walked to the impressive forum in the centre of the settlement, with its Temple to Rome and Augustus, the Capitolium and juxtaposed nymphaeum and forica. Just beyond the forum is the Republican Sacred area which is a wonderfully quiet part of the site, with the ruins of two early temples and a collection of small buildings between them which together, form a more enclosed area of early (Roman) architecture. It was this space that made me plan to go back to Ostia again before I leave, just to soak up the atmosphere. The tomb of Cartilius Poplicola, the area and mausoleum of Porta Marina and the outskirts of the currently excavated Decumanus Maximus concluded our second visit to this very special place. I have said it before and I will say it again. If you have not been to Ostia, go. Go and plan what you want to see. After two full days, I have still not even seen half of it. Ostia is a place where you can spend hours happily meandering around and no matter which path you choose, you will happen upon the most incredible archaeology. 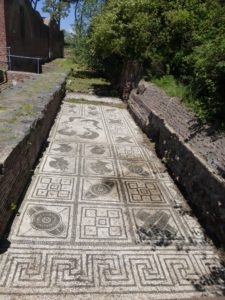 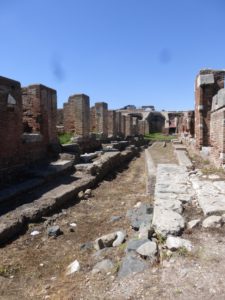 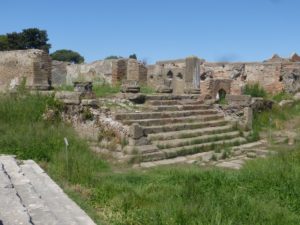 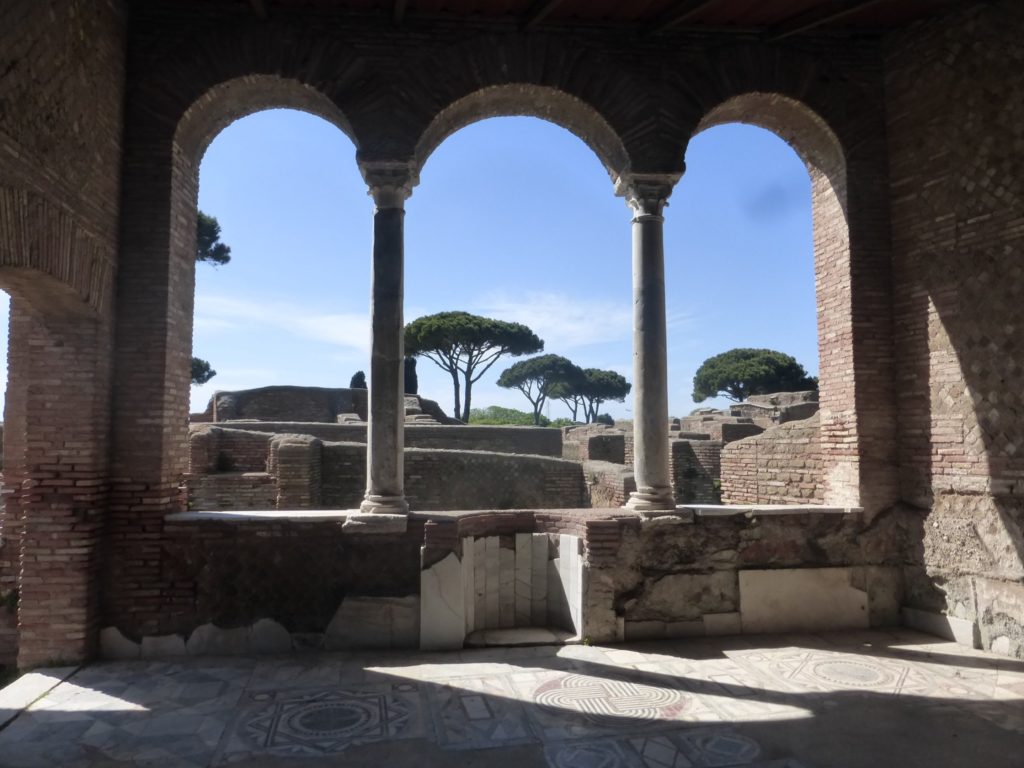 Day 33 – On Friday of last week we headed out to the Quirinal Hill, one of the principal hills upon which Rome was built. The first stop was the Mithraeum of Palazzo Barberini which is situated beneath what was a renaissance palace. Complete with wall paintings and ancient coded graffiti, the room for the mystic Roman cult sits in the basement level of the current Museum and is worth a visit if you are in the area. Upon exiting this lower level, we explored the antiquities and beautiful frescos in the Art Museum above, the ceilings of which were covered in masterful paintings with themes of Christian and Roman mythology. Afterwards, we headed out to the Piazza del Quirinale to look at the Obelisk there and to better understand the layout of the gardens and estates of the Roman period, which were quite different to the large, religious buildings which currently reside there. From the Piazza, we walked down the hill to the Altar of the Fire of Nero whose foundations sit beneath the street level. The altar is comprised of large tufa and travertine blocks that have been reused and repaired over a course of years whilst appealing to the Gods for protection against fires. Upon the floor of this monument, there was ancient graffiti and some sculpture fragments which remained in-situ.

We returned again to the BSR for the second half of Niccolo Mugnai’s seminar on Latin epigraphy, which this time focused on the legends of coins and building inscriptions.

Day 34 – Saturday took us to the Horologium of Augustus, which unfortunately was rearranged as the custodian who was to let us in was not in Rome as planned. Onward then, we went to San Lorenzo in Lucina which is a church situated off the Piazza Navona and below which, there lie the remains of a Roman insula block. The rain was heavy and stormy and so cut any further visits out of the day after lunch.

Day 35 – On Sunday (normally a day off) we returned to the Horologium at the end of the day and saw in the flooded basement of a derelict building the beautifully preserved meridian lines and inscriptions that would once have formed the marked expanse below the obelisk sundial of emperor Augustus. The letters engraved into the marble slabs were much larger than expected and when completely visible must have been quite enormous. It makes me wonder how many other basements hold such finds… 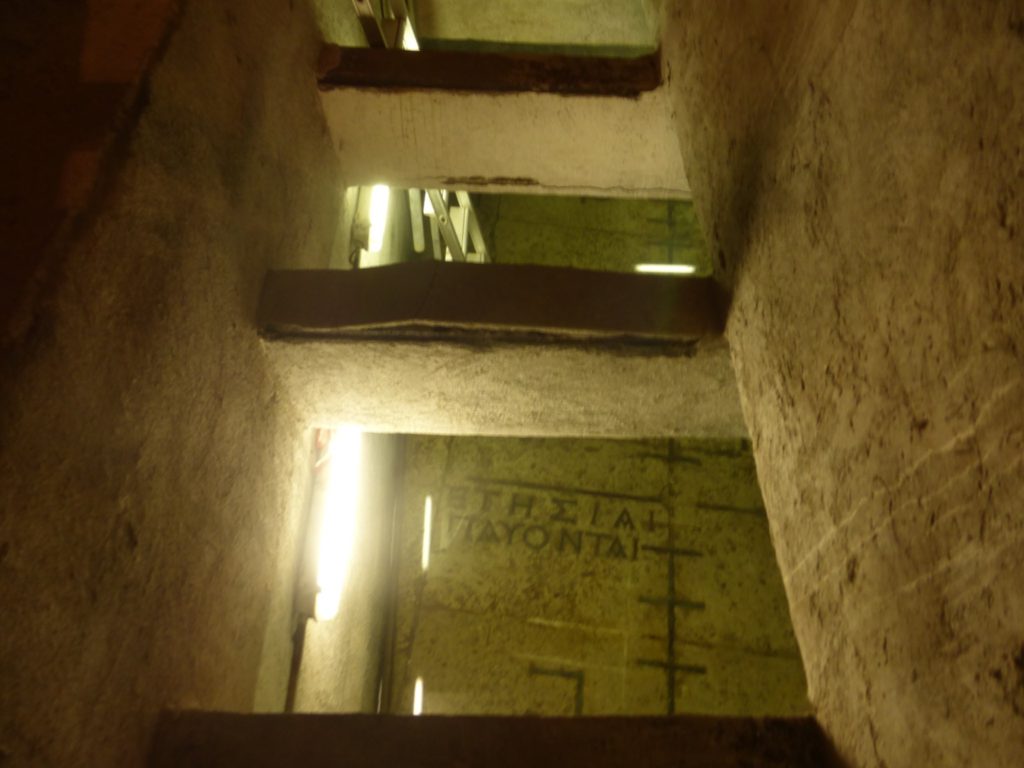 Before the Horologium the group went to visit the Domus Aureus and take one of the tours offered through it. This includes a brief but insightful virtual reality section where visitors don VR visors and headphones and watch as the ruins they are sat amongst come to life before their eyes. It is a strange but rewarding sensation. The programme runs slowly so one does not feel dizzy or anxious and allows you time to look up, down, around and behind you as the world in front of you goes back in time to reveal what was once a city within a city. The Virtual Reality element is only one part of the Domus Aureus tour, which is worth the visit. The tour guide takes groups through a fairly long path through the site and the funds go towards the upkeep of the Domus, the cost of which is extremely high. 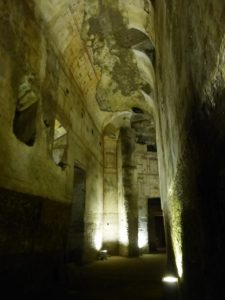 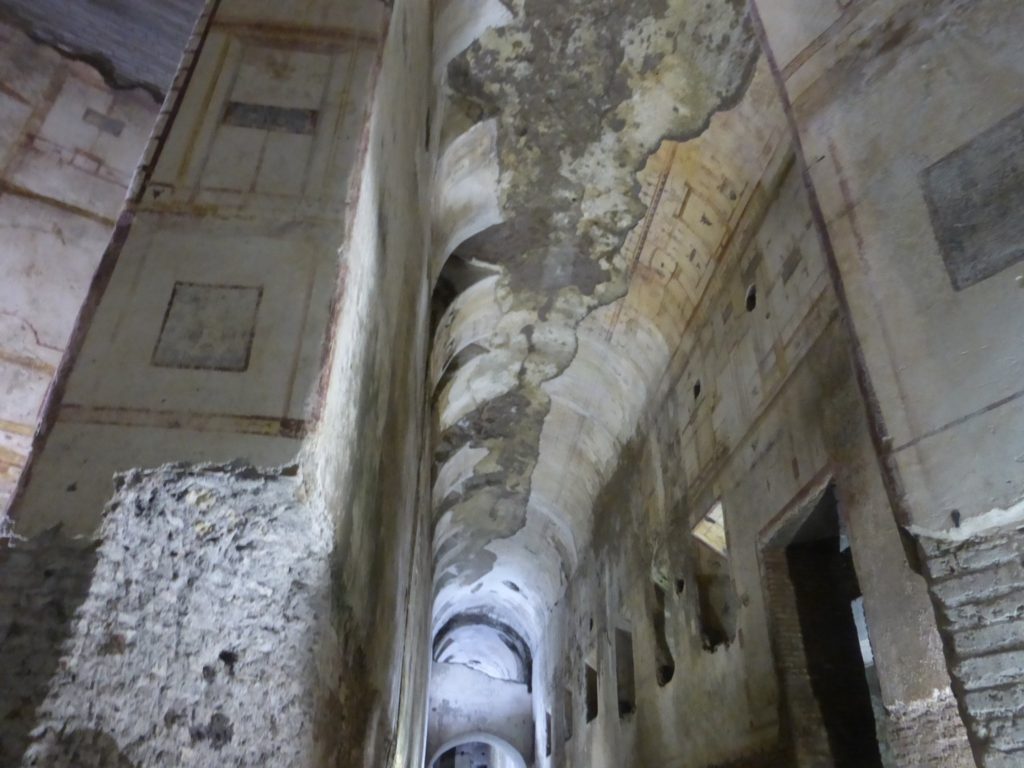 This whole week was busy and full of walking, presentations, seminars, lectures and project work, but this week has only increased in intensity, as I will reveal tomorrow…