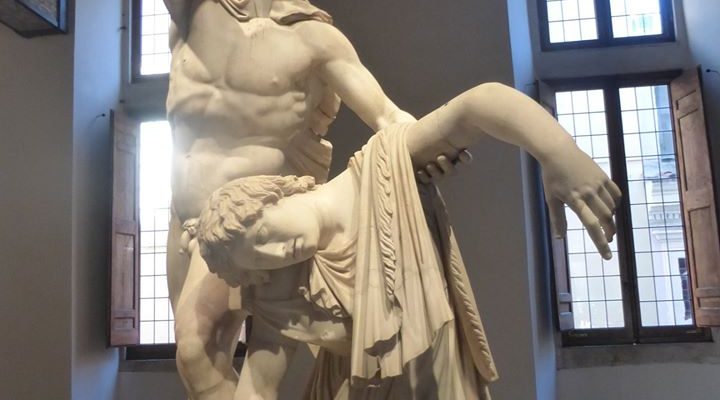 The Italian bank holidays have made this week a short one regarding exploration, allowing for time to calibrate the intense days of research we have been part of since we arrived. With anything up to 11 hours of walking, seminars, lectures, tours and project work 6 days a week, there hasn’t been much time for rest and it has been nice to gather these thoughts together before the next month starts!

Day 23 – The Awardees headed off to the Via Appia on Tuesday and if you have never walked it’s length, I recommend it. There are so many sites along the way and the scenery is lovely. On this occasion, we started at Porta Capena, one of the original gates into the city of Rome which now lays beneath a busy road junction, much like the Forum Boarium from week 1. From here we made our way towards the Baths of Caracalla. These 2nd Century CE bath ruins are definitely, for me, one of the highlights of the course so far.

The ruins stretch up 2, 3 and four storeys high totalling a massive 40metres in places that would have originally had additional vaulting and domes. Walking on the ground level as it was, you get a real sense of the scale of these massive leisure complexes. Redbrick walls, stuccoed with fresco paintings or clad in marble climb up to massive concrete domes. Mosaics of tiny tessera still sit on the floors depicting intricate images of mythological beasts, whilst occasional and handsome sculptures of deities still remain as examples of the many that would have originally filled the niches that run across the walls. Long walk-in pools, warm rooms, exercise areas, changing rooms, plunge pools and large swimming baths are all still present in the plan of the ruins. If you get the chance to go, do. It’s a humbling experience. 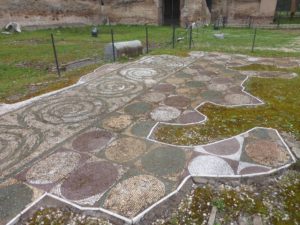 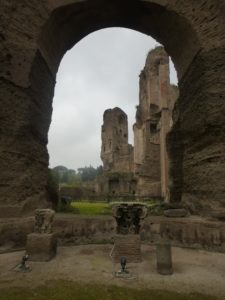 After the baths, we headed to the Tomb of the Scipios, a prestigious family who boast a host of successful generals and politicians in their legacy. Given access to the now private area, we headed underground to see the ruins of the sarcophagi of those interred and where other tombs may have been laid. The mound and cave style of the monument harks back to an Etruscan style of barrow and it made the air atmospherically damp and cold. Within the same area was a separate underground room which was a columbarium. These rooms house large numbers of niches in tidy rows. Each semi-circular niche has space for two urns to be inserted, within which the remains of cremated slaves, workers or family members would have been placed once cremated. The example on the ground of the Scipio family seems to have been prepared for a large number of people around 1st Century CE, but was not actually used. When our tour of this area was complete, we walked to a nearby park where we were given permission to access another (usually closed) columbarium which was an absolute delight inside. The preservation within the columbarium of Pomponius Hylas was wonderful. There were painted, high-detail images of men and women in togas with books, scrolls and animals. Surrounding the niches were larger temple-like frames, each slightly different and some with painted scenes with hippogryffs and victories in the pediments. The burial urns which still held the remains of those buried there in the 1st century CE, were members of a funerary guild. Often run by freed-folks or by those who did not have a large family tie, funerary guilds were communities that paid into a pot and ensured your burial wishes were carried out. This hidden piece of history adequately purveys this combination of a supportive community and individual burial rites. The details were everywhere. Small fresco characters, glass mosaics and inscribed marble plaques for those who rested there. A special visit indeed. 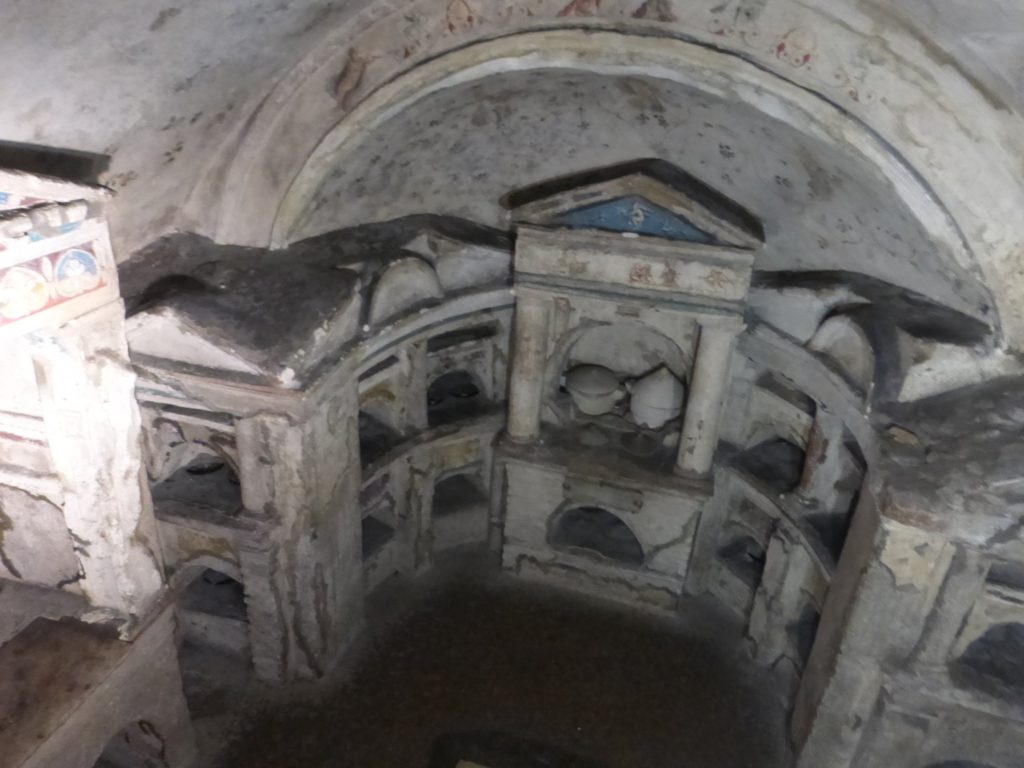 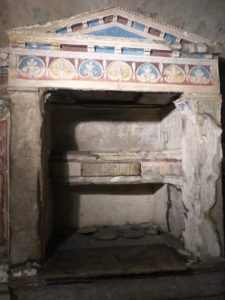 Emerging from the steep steps of the columbarium, we paused at the Porta Appia, a gateway of the city, before heading into the Museo delle Mura – The Museum of the Walls. There are several storeys of the City walls to explore and the panoramic views from the top are quite impressive. Pacing along the mura you get a sense of the scale of these defensive boundaries and why when the hugely successful general Hannibal saw them, he apparently turned around and went home. Towering some 10 metres on top of a raised area of earth, the concrete and brick boundary is almost 4 metres thick in some sections. The walls once encircled the entire central tax zone of the Eternal City, expanding the area beyond earlier versions that had been built previously. The walls are insurmountable and very imposing. There is a reason they are still standing today…

Our final stop for day 23 was the Arch of Drusus. A pretty ruin which sits just outside the exit of the wall museum and still spans the current road. Although it has lost its side arches, the remains of the sculptural decoration and marbles can still be seen across the structure. The arch has caused many debates regarding its origins and is now thought to have been built in the 3rd century CE and have nothing to do with the Emperor Drusus.

Day 24 – The group went back to Imperial Fora on Wednesday 24th to look, this time, at the Roman houses beneath the Palazzo Valentini, Trajan’s markets and the Museum of the Imperial Fora. These explorations were all before getting special access to the area below Trajan’s column, where Amanda (Claridge) gave us an informative insight to the monument she has worked with for years. Dedicated in 113 CE the huge column commemorates Trajan’s victories over the formidable Dacian enemies and it is thought that the friezes were actually carved posthumously as a gift from his heir Hadrian, as a monument of honours. Standing 35 metres high the column was once surrounded by a protective portico of smaller pillars and included space within the pedestal for a burial chamber (Trajan). The statue of the Emperor Trajan that stood atop is thought to have be aligned with that of Augustus on his own mausoleum, deliberately linking the Imperial families. 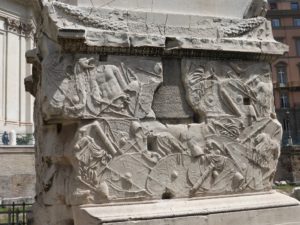 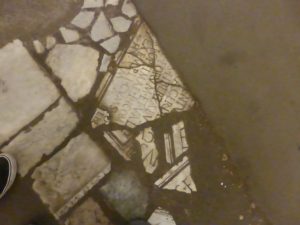 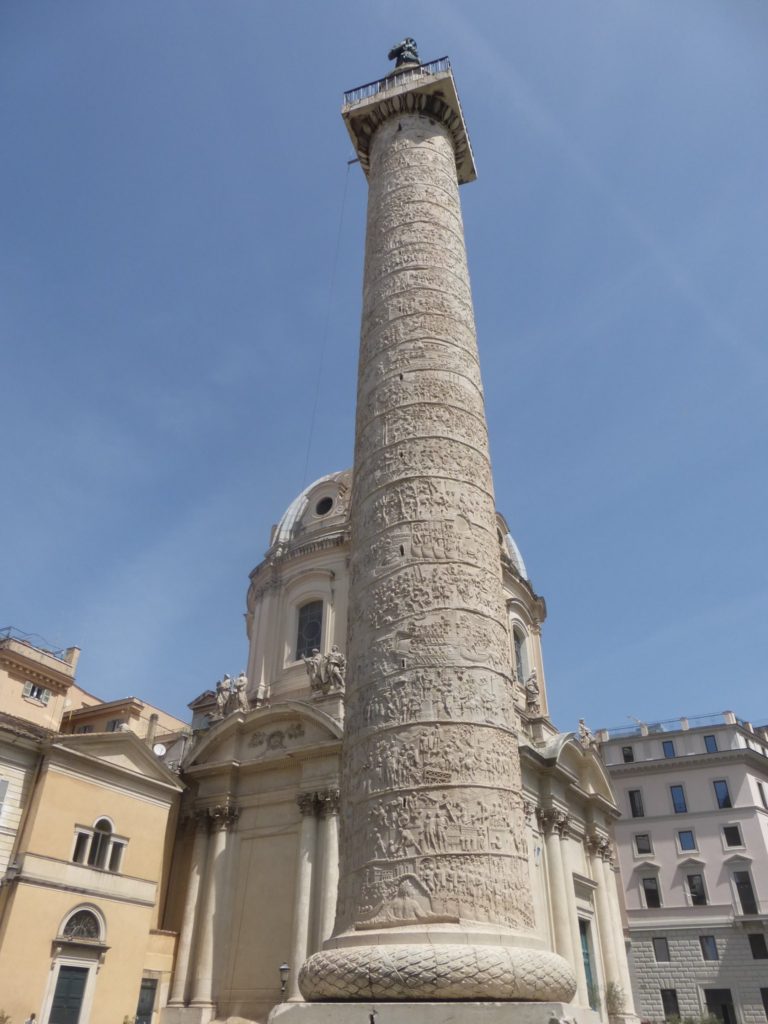 After the Trajan forum, we returned to the BSR for a public lecture on Le Origini dell’Economia Romana, which was given in Italian by Gabriele Cifani, a guest from Paris.

Day 25 – was a public holiday and so a good chance to get into the library and research our forthcoming presentations and project deadlines.

Day 26 – This was our first visit to the Oppian Hill where we, ironically, spent most of the day visiting a variety of subterranean sites usually closed to the general public. We began with the horrea beneath San Martino church looking at the remains of a series of roman vaulted rooms which looked similar to the large layout of the Trajan markets we had seen earlier in the week. Below San Pietro in Vincoli there were further foundations with shops and possible domestic dwellings being partially preserved. Between these subterranean explorations, we popped outside into the sunshine to learn about the Ludus Magnus. Just outside the Colosseum there sits the gladiatorial training grounds which are connected to the amphitheatre by a series of low-level passageways. The Ludus Magnus has all the hallmarks of a small Roman community with barracks, kitchens, arena with seating and shops in which the gladiators could spend their time between matches, Here trainers could teach humans and animals alike to fight in entertaining manners without immediately dying. Such humans and animals were, after all, expensive commodities.

From here we descended again, this time underneath San Clemente church where a series of rooms that would have provided the lower portion to a wealthy domus, still house the remains of a mithraeum, cellar foundations and a host of epigraphic stele (no photographs allowed).

A walk past the somewhat decaying baths of Trajan (which will hopefully be getting some restoration funding shortly if reports are to believed…..) led us to one final church which, sadly, was closed for the morning.

The most surprising visit of the day was descending through a door which can only be described as looking like an electrical cupboard on the bridge at the back of the Colosseum. An uninspiring (and totally miss-able) steel door, padlocked, half-height and covered in graffiti was actually the access point to a beautifully preserved nymphaeum. It is reached by descending a (rather lovely) narrow, Victorian staircase which spirals down some 6 metres below the current street level. There sits an area that would have collected water for a wealthy patron and like the nymphaeum in Segni, tt is exotically decorated. The niches and walls are covered with shells, blue glass beads, buccrania and trophies of war. 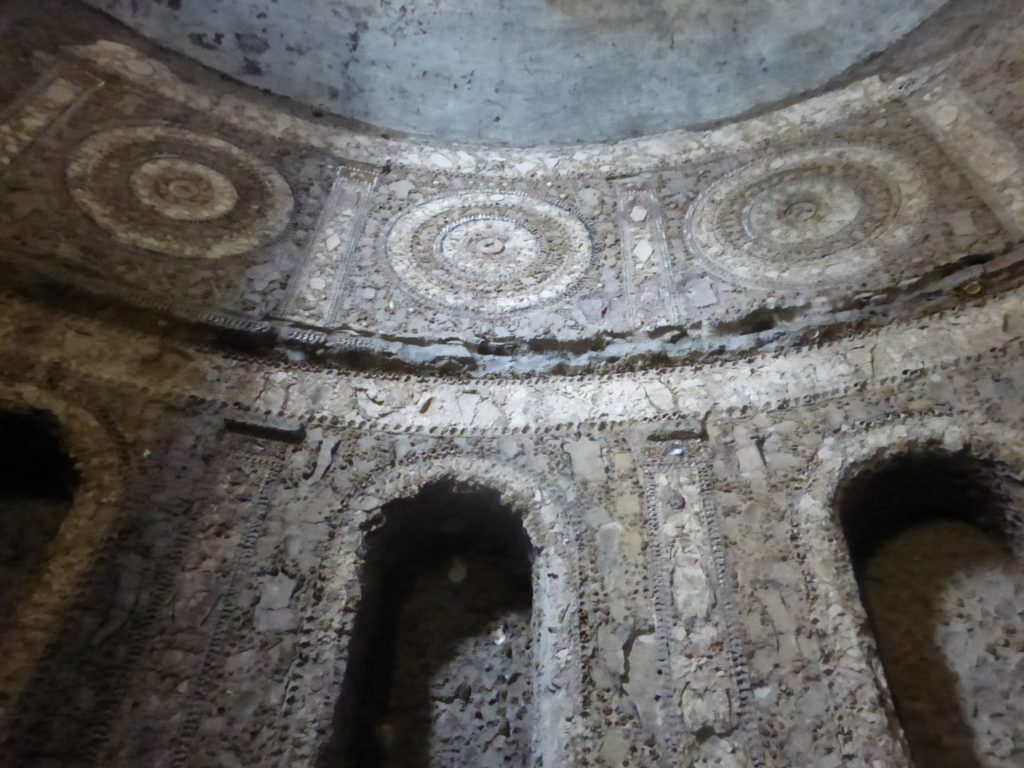 Day 27 – Saturday was a full day of exploring and we began at what is probably one of my favourite museums so far: Palazzo Altemps. Set in a renaissance palace this mixture of elite collected antiques, copies of ancient arts and the remains of the palatial aesthetics creates a fascinating museum in a beautiful building. The rooms display only a few items each but this works well. Each piece is a masterpiece in its own right and the layout allows movement around the objects and people-free space to study the art at length. I must have spent about 30 minutes studying the Suicide of the Gaul sculpture and I have a new affinity for the delicate portrayal of hands within marble portraits. It fascinates me how each finger-segment is considered and together they create an overall expression of emotion that is readable even after the head of the portrait has long been lost. Detailed sarcophagi, statues and Roman portrait busts stand amongst the painted wooden beams and scenery of the palace walls which all centres around a sun-trapping courtyard with a fountain. 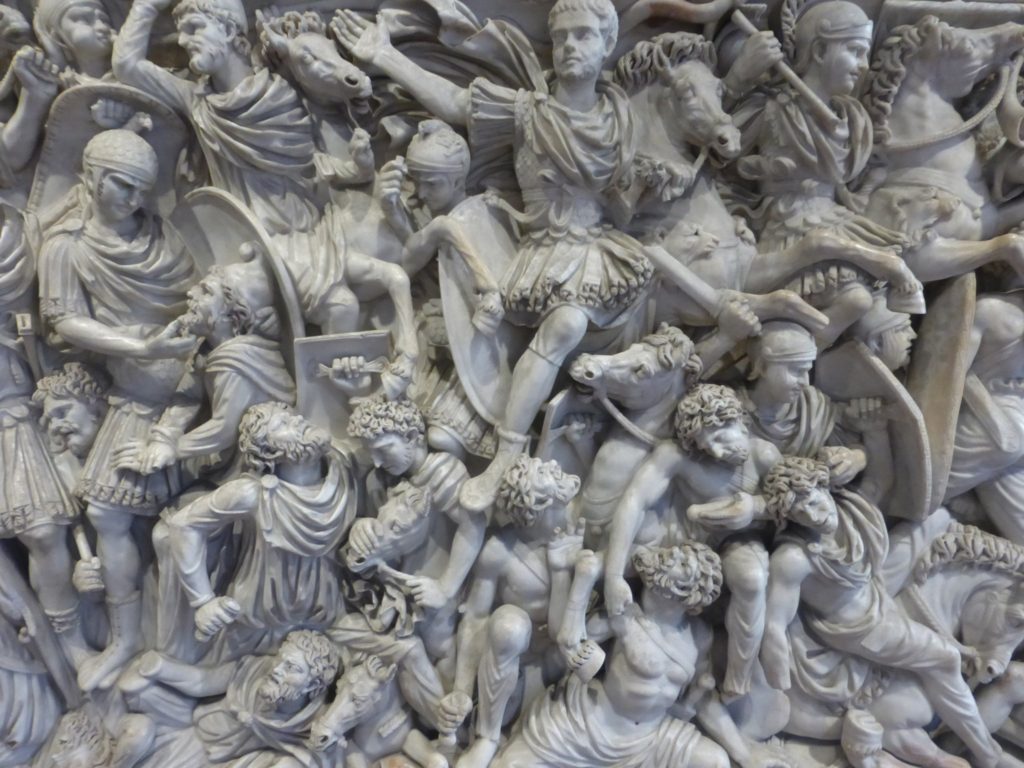 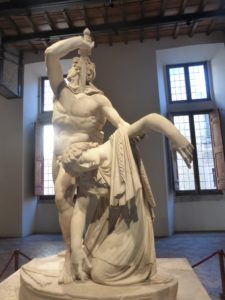 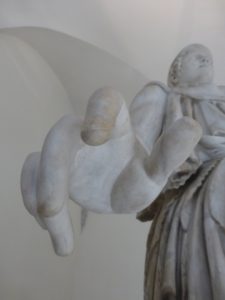 At 11 o’clock, we headed towards the Piazza Navona, beneath which you can descend into the ruins of the Stadium of Domitian. Not much remains of this once huge arena for foot races, but the brickwork and large staircases give a sense of the capacity this entertainment venue once held. The foundations of the Roman architecture were reused through the development of later buildings in Rome and so despite the loss of much of the structure, the modern Piazza Navona above, mimics the original shape and size of the stadium. Passing the last remaining column of the much-debated Iseum Campense (a wedge-shaped building that sits at the back of the stadium) we headed to the Hadrianeum.

The current Chamber of Commerce for Rome sits amongst the columns of a huge temple to the Divine Hadrian. Eleven large, fluted marble pillars remain from the West side of the building which is now set into the later architecture of the area. The columns themselves are fairly unique displaying subtle individualities which can be missed if not pointed out by the trained eye. It makes you wonder why this side survived and the other three did not.