Day 15 – Monday was the second day exploring the Campus Martius for the City of Rome awardees and we started with the Montecitorio obelisk. The monument is now situated in Piazza del Parlamento, where we were also introduced to Mark Bradley, an Associate Professor of Ancient History at the University of Nottingham who was joining us for the day. The obelisk is one of many that were brought to ancient Rome during the Augustan period (27 BCE – 14 CE) as monuments of conquest or political gifts from Egyptian leaders. The base was aligned with the earlier via Flaminia and had a Meridian line on the floor that ran away from the monument heading towards north. It is thought that this monument was used to tell the time (likely) and in modern scholarship has become part of an ongoing debate regarding several monuments in the Augustan period and their connection to astrological charting. I have little doubt that some Romans had knowledge of such things but for me the current evidence for these particular monuments being so inclined towards such uses is inconclusive. Whilst it would be inappropriate to rule out concepts of Roman astrological architecture, the archaeological evidence of the alignment and design of the monuments in question (both to each other and the astrological elements they are meant to adhere to), does not work. Amanda Claridge provides good reasoning for this in her 2017 paper: Motto: Keep it Simple until Proven Otherwise. 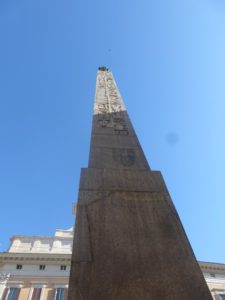 After discussing such debates, we all moved on to the Ara Pacis Museum. The Altar of Peace was built during the Augustan period and officially dedicated c. 9 BCE. It is comprised of a large marble altar with carved friezes which can be approached from a set of marble steps to the rear (West). The altar is surrounded by two bracketing marble walls which reach upwards of 4 metres high and between ten and eleven metres in length. The walls facing internally towards the altar have simple designs of roman sacrifice rituals: bucrania (cow skulls) and boughs of flowers and fruits. The outside friezes are more complex and have led to much debate in their interpretation (see for example: Toynbee, J. 1961. The Ara Pacis Augustae in: The Journal of Roman Studies, Volume: 51: 153-156 and Flower, H. 2017. The Dancing Lares and the Serpent in the Garden: Religion at the Roman Street Corner. Oxford: Princeton University Press). The friezes show figures in ritual progression, deities with their allegorical attributes and the mythological founders of Rome (first Romulus and Remus and then Aeneas). Although the current view of the Ara Pacis contains fragments of ancient and restorative material, more pieces are becoming available through excavation and collections and there are clear thematic references to the Augustan ideologies of legacy, family and peace, framed by the imagery of the natural world. 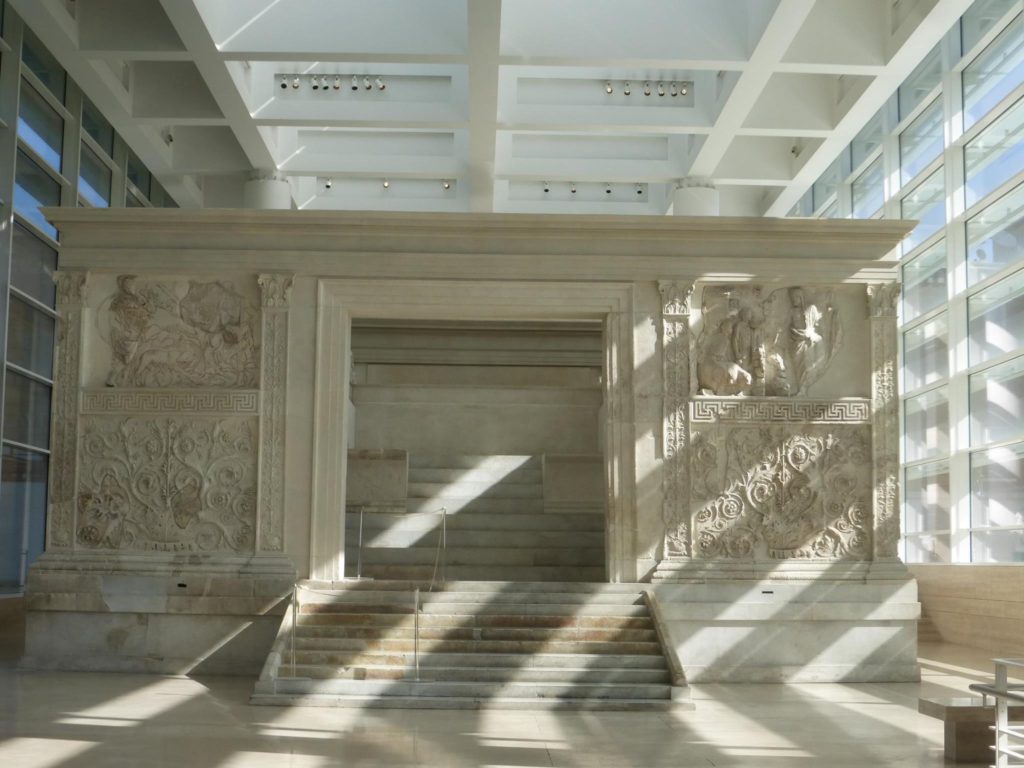 Sat alongside the Ara Pacis on the opposite side of the modern road, is Augustus’ Mausoleum. A large circular monument c.90 metres in diameter at its base. The external walls would have been clad in marble or travertine and the internal structural brickwork of arches would have supported a large amount of weight. There are theories that this may have been earth used to plant trees as suggested by the ancient author Strabo (Geographica 5.236). Sadly the area has been through several periods of modern development, flooding and restoration making the height of the monument and it’s decorative style highly debatable. Nevertheless, these two monuments remind the viewer of the building programmes that were key to the legacy of Roman elites.

Upon return to the BSR we partook in two hands-on and informative seminars. The first by Niccolo Mugnai and the second by Amanda Claridge on Architectural Ornament Under the Republic and the Empire and Identifying and Interpreting Marble and other Hard Stones respectively.

Day 16 – After a busy Monday, the following day was a day I had very much been anticipating with excitement: Ostia Antica. Ostia was an ancient Roman harbour town which now resides just beyond the modern town of the same name. It is a huge archaeological site. Withstanding buildings of several storeys, in-situ sculptures, temples, roads, bakeries and shops there is much to see and more to learn. The remains of millstones, water features, funerary monuments, inscriptions, mosaics and frescoes run throughout the commercial and domestic structures providing a maze a historical niches that had me giddy with excitement. We climbed up to the top of buildings, walked beneath the ancient roads in underground dining areas and tunnels, explored beautifully decorated houses and listened to a host of mini-lectures given by Amanda on the history and possible uses of the area. 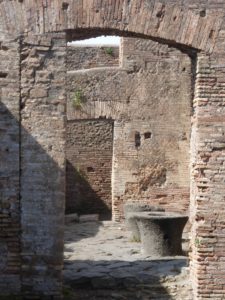 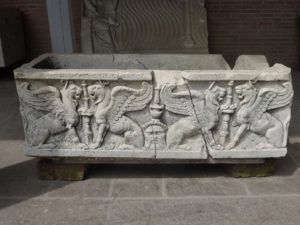 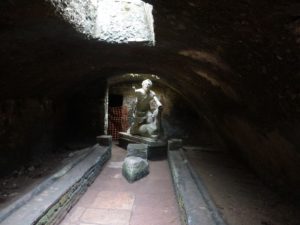 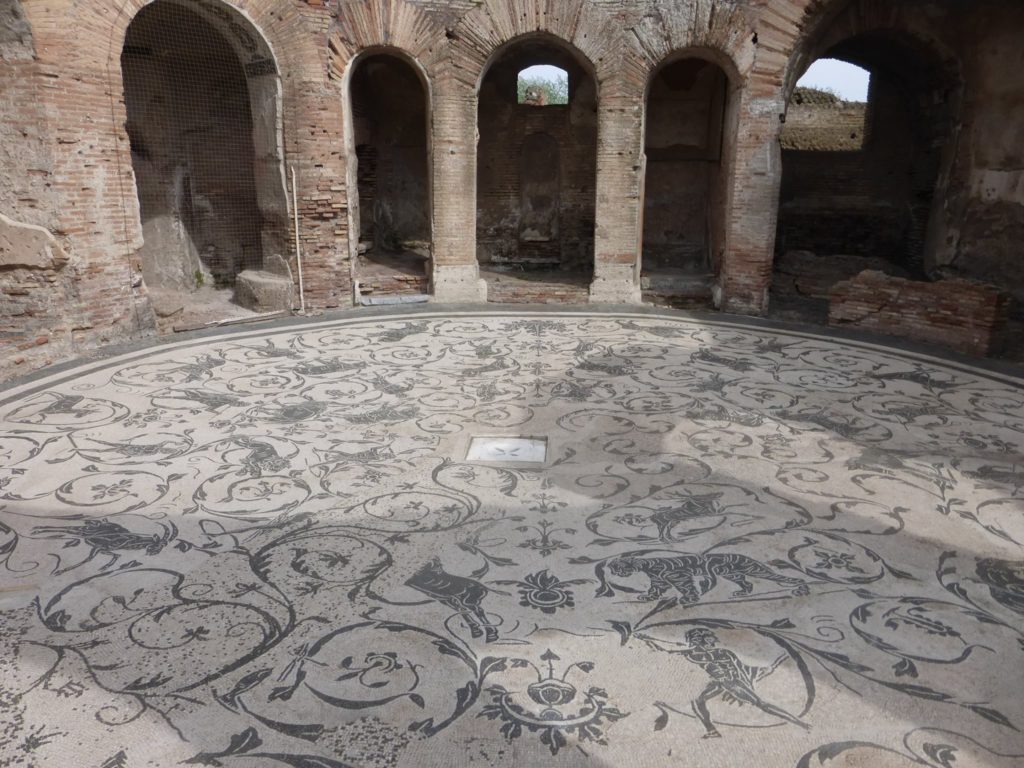 Our aim as a group on this trip was to explore some of the more elite domestic dwellings including: The House of Diana, The House of Jove and Ganymedes, The Garden House, the Insula delle Lerodule, the Mithraea and the on-site Museum. The Museum is small but houses a collection of impressively high-quality sculpture from the Hadrianic and Trajanic eras. The streets of Ostia Antica lead visitors through a variety of settlement areas with bathhouses and access to water never too far away. Beyond the city limits (which fluctuated between the Sullan and Severan eras) the road is lined with funerary monuments and family tombs complete with dedicatory statues and epigraphy. The whole place is wonderful to explore and I am so glad that we have a second day yet to come…

Day 17 – The Imperial Fora cover a large area to the north, east and south of the Forum Romanum. Comprised of the Forum of Caesar, Forum of Augustus, Forum of Peace, Forum of Nerva and the Forum of Trajan. A Forum is a designated area which is usually collonaded, lined with statues and houses inscriptions in marble. They were thought to have been used predominantly for judicial business by holding courts and making laws, sometimes converted into triumphal spaces or areas of gathering.

Each Emperor’s forum was larger than his predecessor, Nerva’s Transitorium being perhaps the exception as it was deliberately built as a connecting corridor between the Fora of: Peace, Caesar and Augustus. Today, each Forum has survived in varying stages of preservation. A mixture of travertine flooring, tufa block foundations, marble and granite columns, capitals, sculptures, inscriptions, altars and earthworks remain, all inter-sectioned by modern roads and often in formations that have been reconstructed several times. As beautiful as the ruins are, it is hard from a printed plan or a ground-level perspective to understand the sheer magnitude of these places. Thankfully, Amanda and Niccolo had arranged to get a higher view from a large balcony floor in the nearby House of the Knights of Rhodes and from up there, it was much easier to understand the relationships of these spaces. If anyone would like a plan to go with some reference photos, just let me know in the comments and I’ll put some photos up. 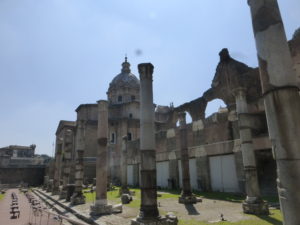 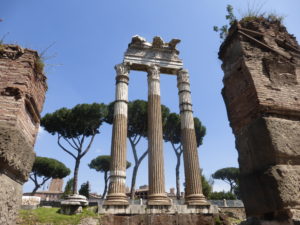 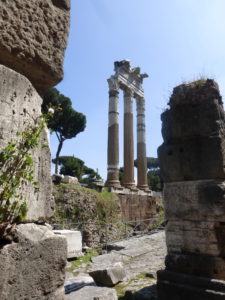 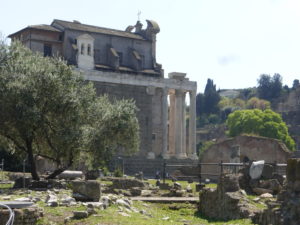 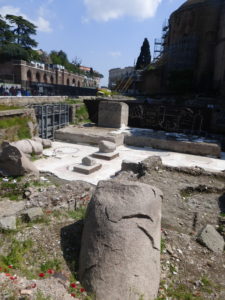 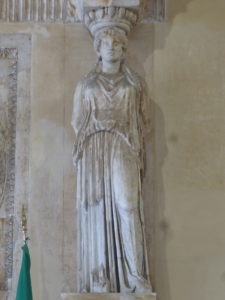 After exploring the Imperial Fora, we headed back to the BSR for a Public lecture by the enthusiastic Paolo Liverani on: Nobili, militari e vescovi. Il Laterano in eta imperiale. (Nobles, soldiers and bishops. The Lateran in the Imperial age.)

Day 18 – The Tiber Island was next. The island is situated in the middle of the Tiber River to the West of the Palatine Hill area and was formed by the high current of the river eroding the bedrock in two tidal streams until an island was formed in the centre. As in antiquity, the modern Tiber Island is mostly home to the hospital and it’s open spaces have been, sadly, an attraction for rubbish and graffiti. On this particular visit however, the Tiber Island was different to my previous memories of it. There were new trees and flowers and the grass was being strimmed. Rubbish was barely seen and what was there, was being cleared away by workfolk. Hopefully a sign of things to come. Archaeologically, the island may not host as mant standing ruins as other parts of Rome, but the bridges (Ameilius, Fabricius and Cestius) have interesting histories and often are thought to have set the model for stone built bridges in the city (previous bridges to the Fabricius are described as being mostly made of wood or in constant need of repair). There are also the remains of a stone ship prow upon which the relief of a snake and a bull’s head can still be seen. The myth follows that this was the site of a temple dedicated to Aesculapius, the god of medicine, which was built after one of his sacred snakes (on it’s journey to Rome) jumped onto the island from it’s ferry and settled there, confirming the island as a place of sacred healing. 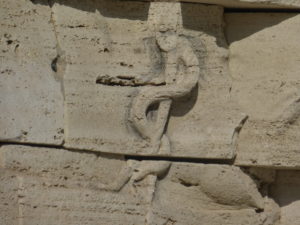 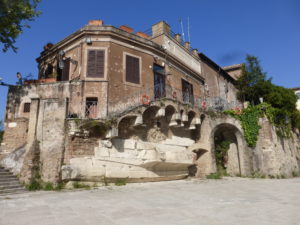 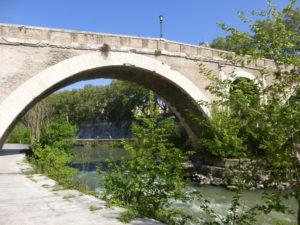 Day 19 – Last but not least for this week was a tour of the Villa Medici. According to the information boards the site has a rich history…

The Villa Medici is situated on Pincio Hill which lays beyond the seven hills of the ancient Roman pomoerium,  but within the later city walls of Aurelian built between 270-273 CE. The Villa stands atop the gardens of Sulla’s favoured general Lucius Lucinius Lucullus, who built a major villa between 66-63 BCE. According to Plutarch, this initial villa covered the entire area between via Salaria Vetus and the current northern path of Pincio and entertained guests such as Cicero and Pompeius.

During the Claudian era, Valerius Asiaticus, twice consul and the first Narbonnean Gaulish man to be admitted into the Senate of Rome, erected a large terrace garden on the site. In the centre of the garden was a broad, semicircular nymphaeum which dominated the area now belonging to Trinità dei Monti. The nymphaeum chamber sat beneath a temple dedicated to Fortune and Messalina, Claudius’ wife, is said to have coveted the domain so much, she and Claudius bestowed an overwhelmingly large array of honours on Valerius Asiaticus, until his eventual (honourable?) suicide. This would not be the only death on the grounds as several years later Messalina was murdered at the site by soldiers on her husband’s orders. 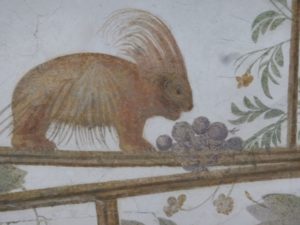 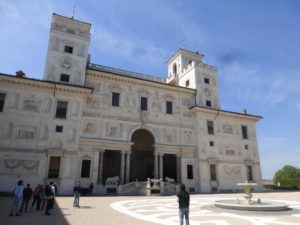 The villa of Lucullus remained imperial property until the time of Trajan, who apparently preferred the gardens of Sallust, on the eastern part of Pincio hill. During the third century CE the domain was occupied by the patrician family of the Achilii, who later bestowed it on the Pincii in the fourth century. It is the Pincii family who gave the Pincio hill its name although little is recorded of the family themselves.

Although the Villa was within the Aurelian city walls of the third century, the buildings collapsed under the invasion of Alaric troops which entered through the Salarian gate in 410 CE. Emperor Honorius (395-423 CE) built his palace in the decimated gardens and in 537 CE the estate was secure enough for Belisarius to make camp as he defended Rome against the Ostrogoth Vitigès. As the Roman Empire collapses, suburban villas fell into disrepair and this estate remained thus until its ruins provided the foundations for the beautiful abode of Ferinando de’ Medici. In
1576 de’ Medici completed the building of a large villa (started by Vardinal Ricci) which sat at the edge of the well established Borghese Gardens. The Villa is now a beautiful building with a host of ancient friezes, statues and fountains, all set in tiered gardens. The Villa now provides studios to artists who are awarded residencies by the French Academy of Artists. The grounds have provided inspiration to renowned composers, painters and sculptures alike and remain open to visitors of the modern-day.

Next week the course takes us to the Via Appia!