Day 11 – The Esquiline Hill is one of many hills that collectively create the topography of the city of Rome. It’s elevation made it a quieter area than the bustle of the city centre for those with enough status to afford the land. Large Domus and gardens were more than just a spectacle and provided privacy for the elites of Rome. It is this neighbourhood that we hoped to explore as we climbing up the slopes towards the Nymphaeum of Alexander Severus. The group paused near the top at an inconspicuous door which led to a set of apartments. The block looked very much like any other modern dwelling in Rome, but something rare was hidden below. After being let in by an enthusiastic resident, we were lead into the basement level of the building. Here, preserved in situ beneath the flats was a Roman altar to Mercury. A large marble rectangular altar upon which a Latin inscription revealed that the local magistrate had set up this altar to Mercury (as the neighbourhood god) and dedicated it to the emperor Augustus. The altar was a compitum, that is, a shrine at a crossroads, of which there were a great many throughout the city. It is thought that this one is one of the last remaining in-situ examples to have survived the city’s modern developments. This particular example survived because the current occupant’s grandfather had been an archaeologist and had preserved it beneath the new build in 1888. 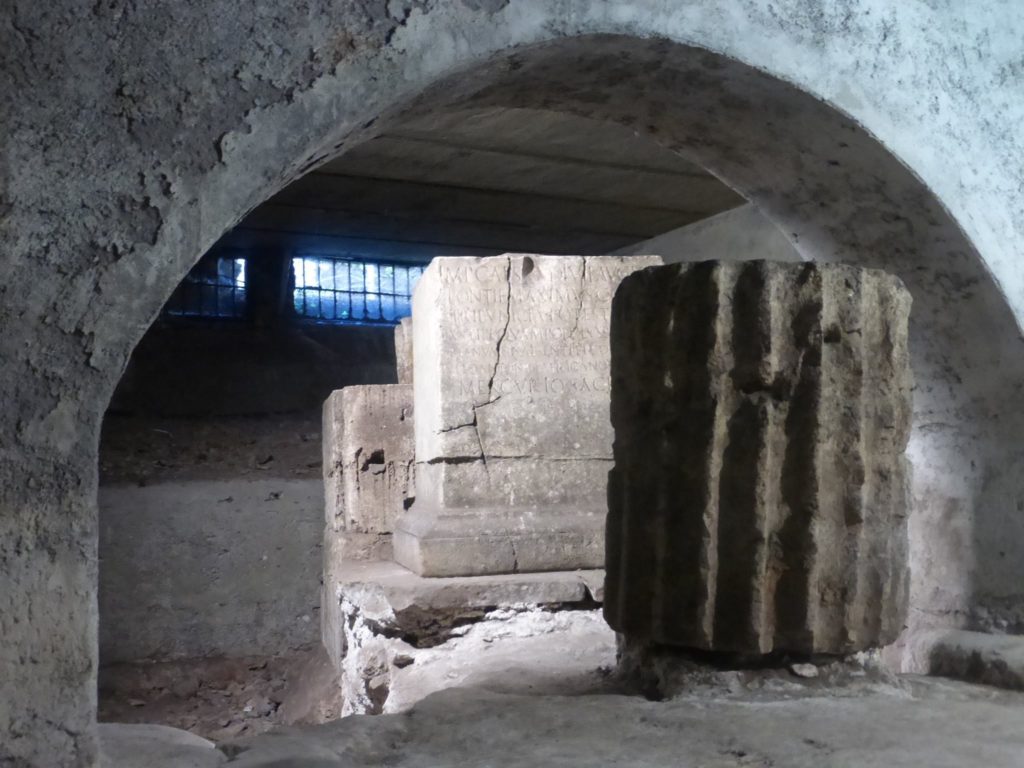 From the altar of Mercury, we travelled further up the Esquiline Hill to the Arch of Gallienus, passing beneath its solid travertine blocks now set between two later Christian churches. The arch has lost it side arcs but still boasts a Latin inscription which sits on the fascia just below where an older (Augustan?) inscription had once sat. The current legend reads:

Gallienus, most clement prince, whose invincible courage is only outdone by his piety and to her imperial highness Salonina. Aurelius Victor, in complete devotion to their Majesties, will (made this).

With a quick stop at the Santa Maria Maggiore and via in Selci to see Late Roman basilica brickwork and shop fronts, we filed into the Auditorium of Maecenas. Down a slope (original Roman) below what is now a busy modern crossroad, sits a long hall. The walls have rectangular niches placed in regular spaces along each wall which end in a semi-circular seating area of around 7 levels. Holes in the tufa suggest these were once clad in marble and there are the remnant colours and shapes of intricate frescos still on the walls and stucco. The area is the ideal space for entertaining actors, musicians or recitals to take place, whilst the decoration and limited seating suggest this was very much a party you needed an invitation to. Although the Esquiline Hill may not boast a (comparatively) huge amount of Roman archaeology on its surface, what remains below ground, is fairly unique. 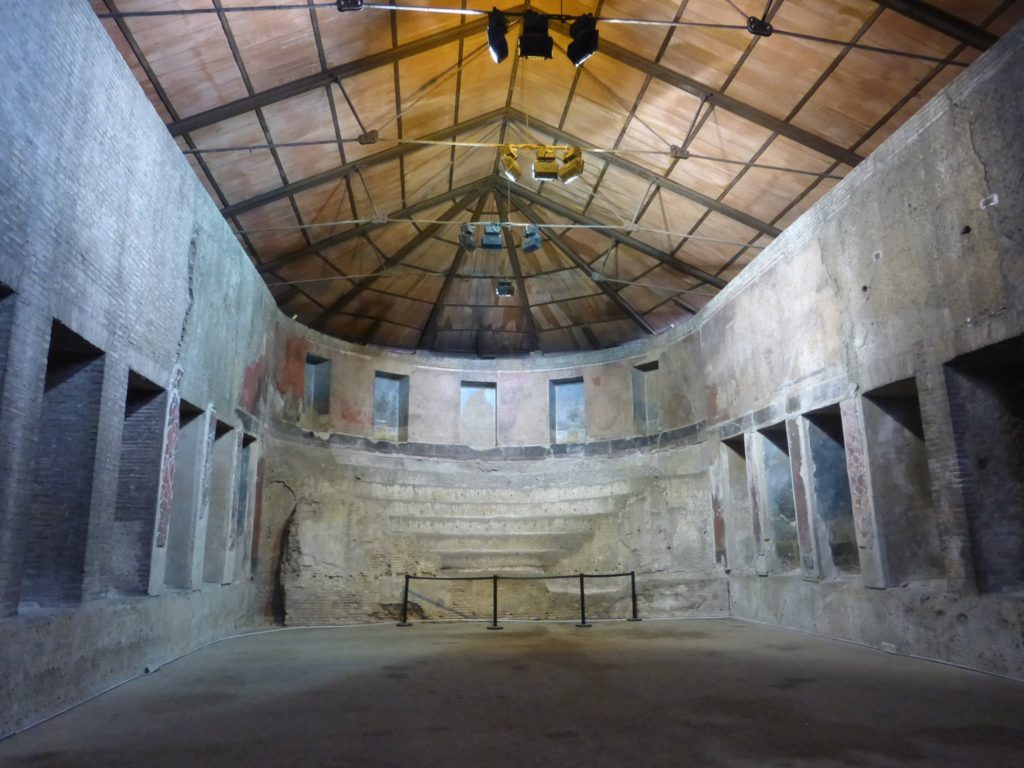 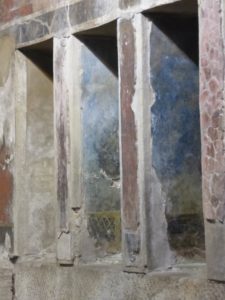 Day 12 – On the following Friday, we were joined once again by Monica Ceci who gave us a guided tour of the Area Sacra of Largo Argentina where the remains of four temples can still be seen from the modern street level. Down in an excavated area which has been left open, columns, pediments and tufa blocks collectively help to reconstruct the multi-phase courtyard which held three rectangular and one circular temple between 2nd century BCE and 2nd century CE. Below the visible columns and plinths sit earlier phases of previous temples, including the original altars, which were respected and left in place when the rebuilds above occurred in antiquity. The area is currently being reorganised under a funding award and is hoping to be reopened to the general public by the summer of 2019. 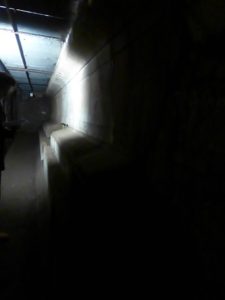 Climbing back into the sunlight, Amanda (Claridge) led us all to the Theatre of Marcellus where we discussed it’s contextualisation with nearby Temple of Apollo Sosianus and the Temple of Bellona. This area has been preserved by its conversion into high-status apartments blocks and the incorporation of some of the Roman ruins into a 15th-century church. Continuing the conversion theme, we ended the day with a comprehensive tour of the Pantheon. 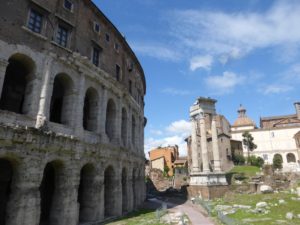 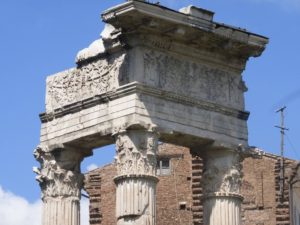 The complexity of the Pantheon as a political device, a functional building, artistic achievement, engineering feat and geometrical wonder has provided the muse for a number of books over the years. The collection of marbles from around the furthest reaches of Roman provinces, the symmetry of the artistic design and the unprecedented architectural dome which is yet to be replicated by modern builders, cohesively produces a monument to the skills, resources and self-recognition of the Roman world. I will aim to go back when there are less people and get some better photographs. 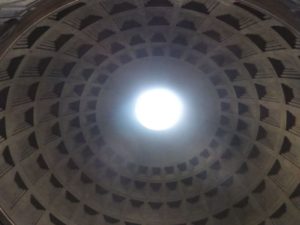 Day 13 – The final field day of week 2 took us to the Temple of Veiovis and the late Republican Tabularium which sit beneath the current museum of the Capitoline Hill. The Tabularium was an administrative building to hold records and libraries and was ordered for construction by the Roman Republican Dictator Lucius Cornelius Sulla Felix in the 1st century BCE. The building was finished by consul Quintus Lutatius Catulus in the year of Sulla’s death (78 BCE) and respectfully abutted the already existing Temple of Veiovis, the column bases and foundations of which can still be seen below ground. 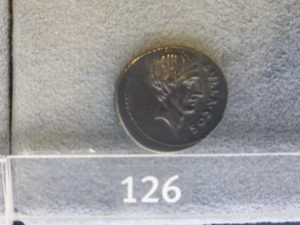 After visiting the temporary exhibition La Roma dei Re. Il racconto dell’Archeologia (which has an impressive collection of finds from the Bronze Age to the late Republican periods), I stumbled upon some exhibited coin collections from the 18th and 19th century. Low and behold, within these collections sat two Sullan coins of which I was aware (I’m currently writing a paper on them amongst others) but had never seen in the flesh. What a way to finish the second week of intense but enlightening field research.