Once again the University of Reading’s Archaeology Department has done a sterling job organising and running a field school for its students. Alongside undergraduate and postgraduate students, local residents, archaeology enthusiasts, A-Level students and long-time Silchester volunteers arrived to help excavate, record and decipher the Roman Bathhouse of Calleva.

The areas opened in 2019 were a combination of extensions from last years Trenches 3 and 2 and a new area to the west (Trench 1). Trench 1 revealed some seriously impressive in-situ architecture with floor surfaces, opus signinum, multiple phases of reparation and construction and some wonderfully preserved herringbone flooring.

Trench 2 also had multiple phases of building with Roman roof tiles being reused for drainage and some very rare hexagonal decorative tiles flooring one of the rooms uncovered. The standing walls discovered last year were further excavated unveiling up to a metre of standing masonry in some areas and providing a much-needed perspective of the relationships between Trench 1, 2 and the Iron age boundary ditch in Trench 3.

The target in Trench 3 was to find the edges of the ditch and plummet into the earth to discover what finds, fills and recuts there may have been to the feature. This the team did with gusto reaching an impressive 4.83m in depth over the course of three weeks. This intense labour was rewarded with the unusual organic finds preserved in the lower waterlogged deposits. Collapsed wattle fencing with a human skull placed on top, underneath which there were articulated dog skulls, pottery, worked wood, leather and pins, all wonderfully preserved within the depths of this feature. 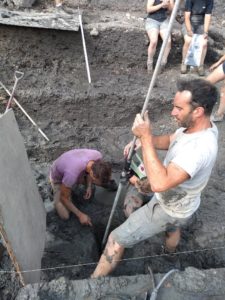 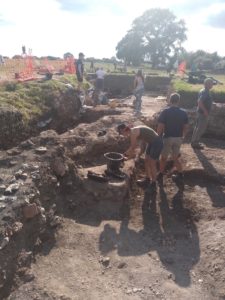 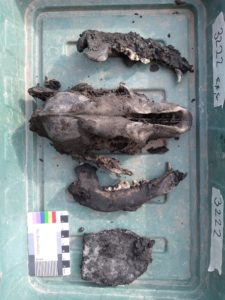 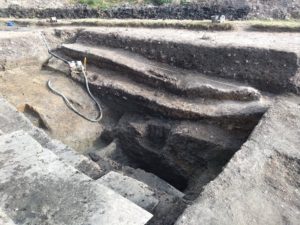 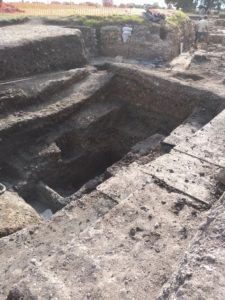 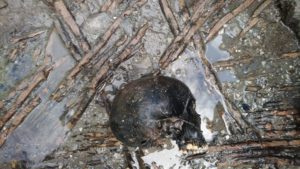 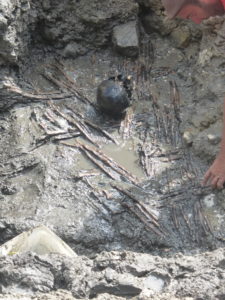 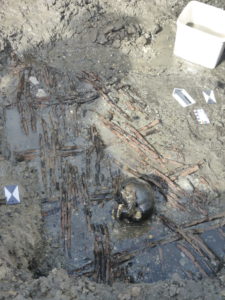 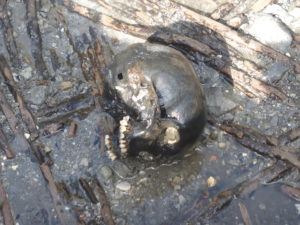 Silchester has become an institution in its own right over the last 20 years. The community of diggers and the connection they have with the local inhabitants of the village is an unusual and important bond for the preservation of this Roman site. Next year may well be the last year of excavation at Silchester, with this traditional group but I have no doubt it will be one to remember.