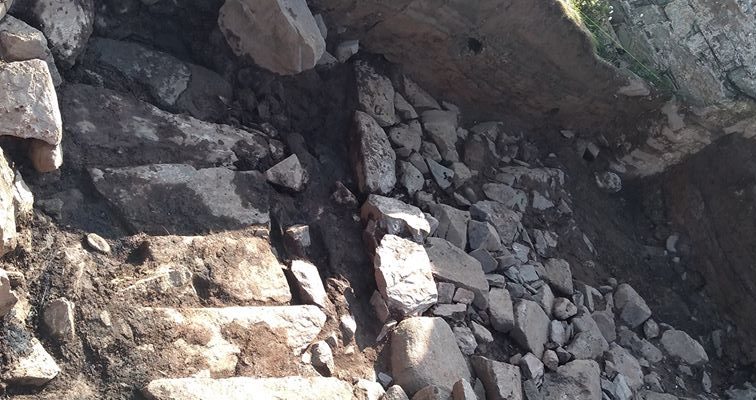 The 2019 excavation at Dunyvaig was immensely successful. The discovery of: new buildings, special finds, wall foundations, stairways, floor surfaces and middens allowed for some solid new theories on the chronological story of this important site.

In Trench 2 specifically, the Sea Gate Crew had been working around the clock to uncover as much as possible of the new building walls. This task included removing a variety of layers in stratigraphic sequence, some of which comprised of very large and cumbersome rocks. These large worked stones most likely represented the collapsed material derived from the castle itself. The positioning of these layers of collapse or demolition proved particularly useful for the understanding of the overall chronology of the sea gate area. Each collapse or demolition event was connected with a corresponding burning event which in turn, surrounded the different building phases. In short, there had been multiple horizons of building, use, burning, collapse, rebuilding, burning, destruction and finally abandonment. Within these horizons complex pockets of more controlled fire was found suggesting potential internal areas for burning (temporary hearth?). Derivatives of metalworking like slag encouraged a variety of environmental samples to be taken. Laboratory consultation of these soil samples enables specialists to check for evidence of insitu smithing, metal fashioning or imported materials. 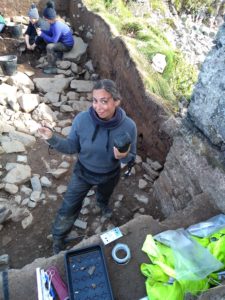 Micromorphological samples were also taken by Dr Rowena Banerjea. These are taken by pushing several metal tins into the sections of an excavation, ensuring the uppermost context in each tin overlaps with the lowermost context of the sample placed physically above it. This process enables a full straigraphic sequence to be taken back to the lab where Dr. Banerjea will inject the samples with resin and slice them down into very thin slices between 25-30micrometres in thickness. These ‘thin sections’ are then analysed using petrographic polarizing light microscopes which help to highlight the different components of the specimen. Micromorphology plays an important role in the understanding of relationships between natural and anthropomorphic evidence.

The hard work of digging and sampling and cleaning in lashing rain and fierce winds paid off. In the final week of excavation, to the east of the trench, a beautifully preserved set of steps came into view descending down towards the coastline. Between the building and the steps there seemed to be a suggestion of docking space and as the whole area was cleaned a variety of metal, bone and ceramic finds popped up. 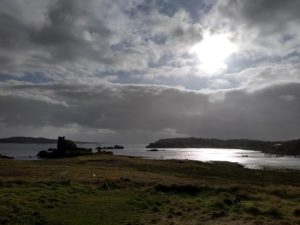 The steps were such a wonderful discovery for my team of diggers but also such an important find with regards to the sequence of the area. Their position within the temporal horizons helped to give a clear understanding of what this area may have been used for at different times. The building to the west of the trench also provided more information with a series of burnt layers upon which a dateable brooch fragment was found. Made of a copper alloy and in a very fragile state, this is currently undergoing conservation, but you can see some preliminary pictures of it below. It may be heavily fragmented but its shape and patterning are fairly distinctive, so it will be interesting to see what the specialists suggest about its original form. 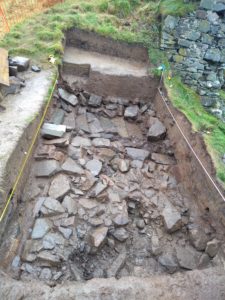 Other finds included characteristically medieval green and yellow glaze pottery sherds most of which were identifiable as handles or bases, with some of the fragments being heavily patterned. Such features can prove incredibly helpful as diagnostic characteristics for dating.

All in all the excavation was a resounding success. Want to know what happened in the other trenches? Check back later on this week and I will post a PowerPoint of the presentation given at the Islay heritage end of dig talk. Also, for those of you who are interested in the academic potency of this site, there will eventually be a preliminary report on this year’s excavation which you will be able to read (alongside last years) at https://reading.academia.edu/BunnyWaring.

Here’s hoping we can all return next year to this fascinating site in the middle of the sea!