The trenches have been working full steam ahead this week with the new students settling into their roles and gaining confidence in recently acquired skills. Layers have been cleaned, photographed, planned, sampled and levelled in all three trenches.

Trench 1 had a wonderful discovery of a seal bearing the name of John Campbell of Cawdor. This name has belonged to many nobles in the Campbell line, but the date on the seal assigns itself to the John Campbell the 3rd, son of Archibald Campbell and Isabella Grant. This John was famed for being sold land on Islay (including Dunyvaig castle) by Angus Macdonald 8th in 1612, despite the clans’ long-term rivalry. This caused a rift within the Macdonald clan with opposing members’ occupying Dunyvaig Castle in protest until the Campbells’ lay siege in 1615, reclaiming the Islay lands and further territory on Jura from a third clan, the Macleans. 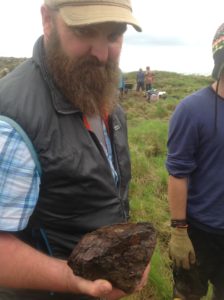 A cannonball found on the beach at the foot of the castle. 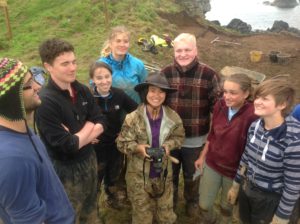 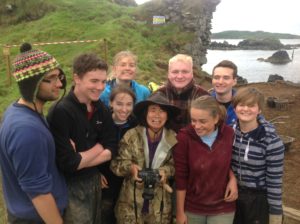 My students are always in high spirits

Whilst Trench 1 was uncovering walls, an aristocratic seal and floor surfaces, a few extra evaluation slots were opened by Roddy’s team from trench 3. Trench 2 also had some discoveries of their own. Two new walls were uncovered in the West of the trench, forming a possible open-ended three-walled storage building that had been burnt in an (as of yet) unknown event. In the East of the trench deep layers of levelling deposits comprised of imported soils and turf walls continued to go down to some depths. Finally, at the start of week three, it was discovered how they related to the burning event and what it was exactly what they were covering….. but that’s for next time. 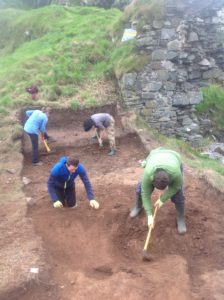