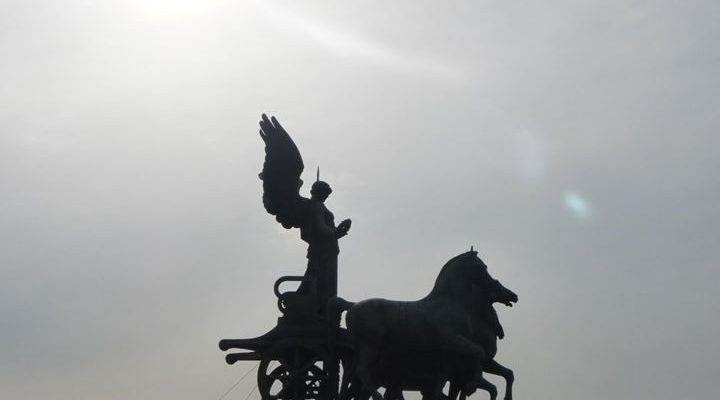 Greetings from the British School at Rome (BSR),

I am currently sat in the library with a stack of books on Roman Republican history to my right and a sunny garden to my left. This first week has been a whirlwind of adventure and knowledge! There is so much to discuss I shall have to post more than once a week I think!

Day 1 – Arriving at the BSR was a surreal experience. After such a long journey to get here, I took a moment to stop at the bottom of the marble steps and look up at the eight large columns topped by temple-style pediment. I buzzed in through the door on the right and was greeted warmly and professionally at the front desk, before being shown to my room. At 4pm the awardees of the City of Rome course gathered together to meet for the first time and to introduce ourselves to our hosts and tutors, Professor Amanda Claridge and Resident BSR Researcher Niccolo Mugnai. At 4.15pm a bell was rung in the courtyard, as I soon learnt it does every weekday, to signal afternoon tea-time. Tea is served in the dining hall where anecdotes were exchanged and we were given instructions for our first field day (day 2).

Day 2 – The first day in Rome was a busy one. We left as a group at 8.30am to the area once known as the Forum Boarium. This ancient port and cattle market is now lost beneath a busy road junction of modern Rome. It is not far from the Area Sacra Sant’Omobono where we had a guided tour of the excavation that had taken place there a few years ago. This special area gave important insitu sections that showed the re-use and re-direction of the ancient roads which were constantly active there between the bronze age and late Roman Imperial periods. There was also evidence of early temples, workshops and a nicely preserved circular well with egg motifs. 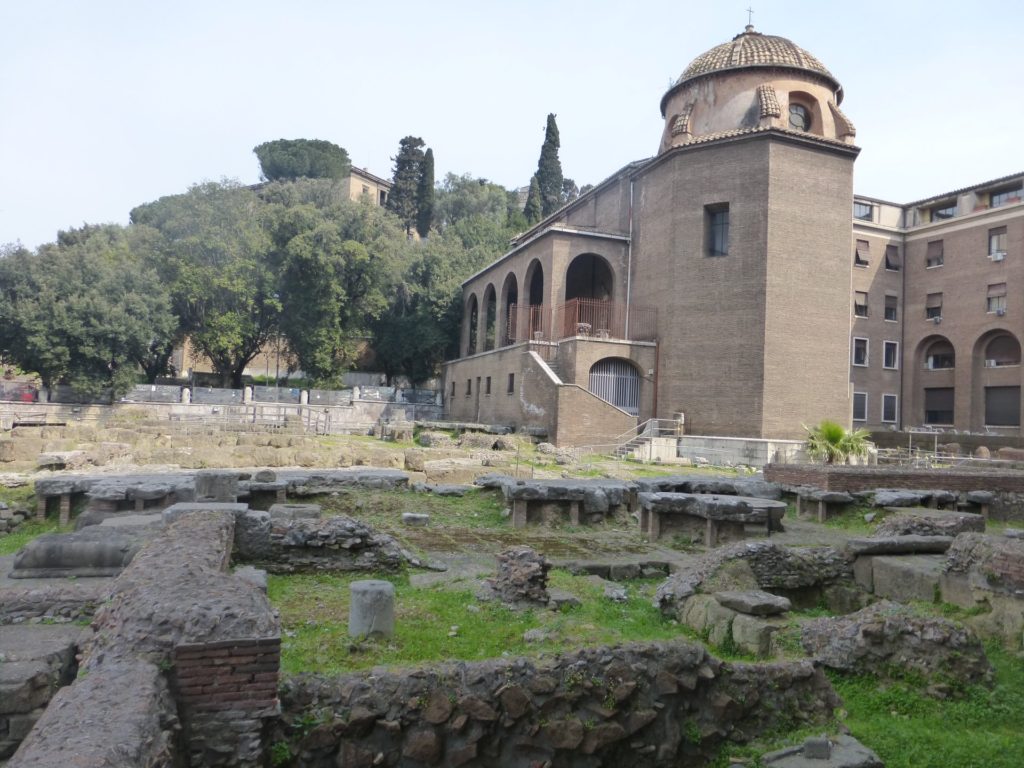 After this tour, we headed to the nearby Temple of Portunus, an incredible example of 1st century BCE architecture, conserved by its transformation into a Christian Church in the 5th Century CE. This temple was of particular interest to me as it is referenced in contemporary literature as being both dedicated and restored (most likely one or the other) during the height of Sullan power (80 BCE). Next was the round temple of Hercules. A circular collonaded building with examples of Greek architectural influence and again, preserved mainly by its later conversion into a functioning church. For both of these temples, custodians let us inside to look at the preservation of architectural fragments and art otherwise unseen by the public. 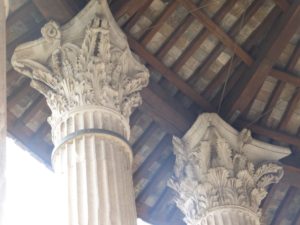 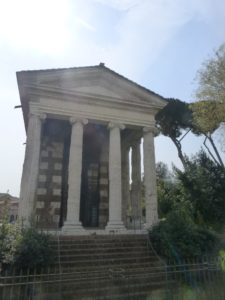 This we did all before lunch!

After quick rest and a bite to eat, we walked to a back street just west of the Circus Maximus where beneath the prop studios for Rome’s Opera House, we met the custodian of a Mithraeum. Upon entry, we descended into a large room supported by four modern concrete pillars. At the bottom of these foundations was a small maze of Roman stucco-covered walls, the uprights of which were constructed as layers of tiles and mortar supported by archways and marble floors. The remains of the altar to Mithras was still visible, along with inscribed dedications on the walls and porphyry marble circles on the floor. How atmospheric this place must have been! The upper levels of the Roman ruins suggested these rooms sat beneath a collection of further rooms, accessible from the (Roman) street level, unsurprising for an area associated with private activities (Mithraism) but thrilling to visit nonetheless. 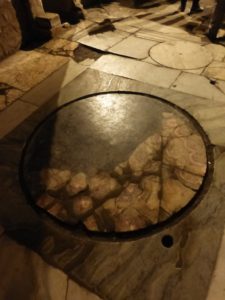 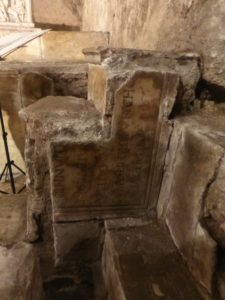 After further visits to the remains of the Altar to Hercules in the crypt of the adjoining church and a walk up the Capitoline hill, we finished out the day with a stunning panoramic view from atop the Vittorio Emmanuele monument in the centre of Rome.

I hope, from this brief introduction, my determination to come on this course has become clear. All of what I have described to you happened on the first two days alone and the rest of the first week was no less intense.

Day 3 – As with the Temples of Portunus and Hercules, on day 3 we were given access to areas that are not normally open to the public. This time it was the Curia (senate house) that was open to us. The Curia’s size and impressive (and remarkably) intact 3rd century CE flooring took me by surprise. Despite various periods of dismantling during both modern times and antiquity, the internal space gives a real sense of the importance and scale of the building. This was something that until now, I hadn’t fully appreciated. The huge bronze doors which were anything up to 9 metres high would have let in the daylight and let out the sounds of the political proceedings. The sunlight would have fallen directly onto the beautifully inlaid marble floor, which, with its exotic materials, offered its own political statement about Rome’s territorial reach. 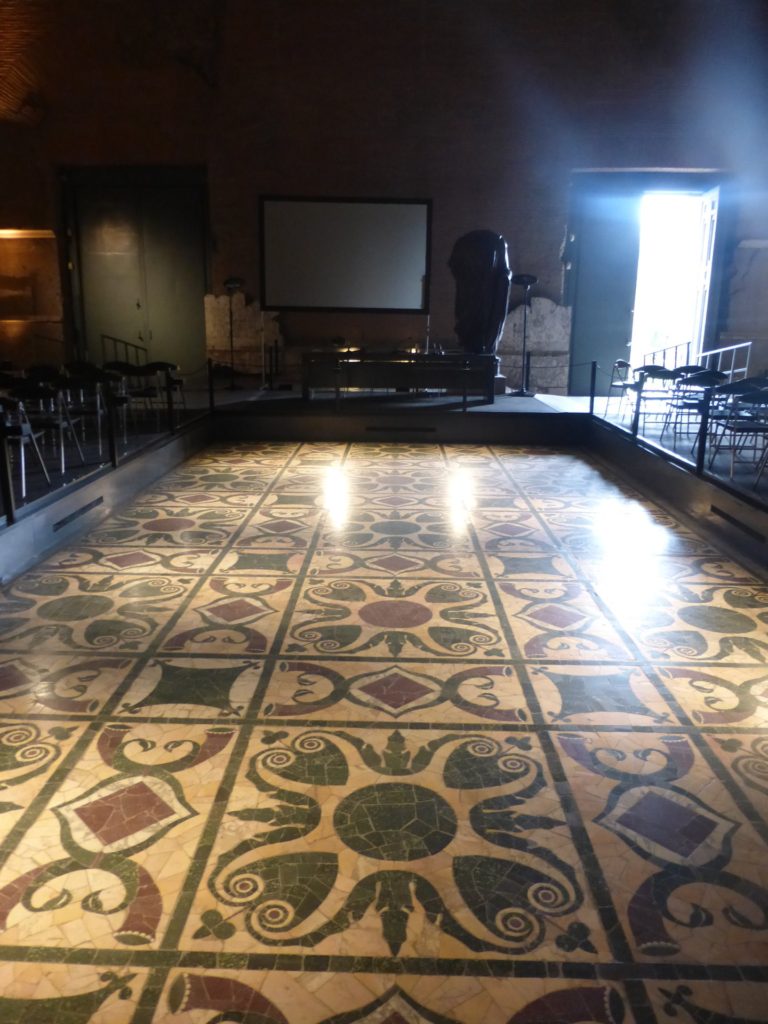 After discussing at length the marble friezes displayed in the Curia found in the nearby Basilica Iulia (they show Hadrian’s abolishment of public debts and various other acts to improve the financial stability of Roman citizens), we took a short tour (the first of many) around the forum acclimatising ourselves with the layout and the problems facing those who were constantly reconstructing it. We visited: Basilica Aemilia, Rostra, Temple of Saturn, Temple of Concordia, Arch of Septimius Severus, Temple of Divine Julius, the Arch of Augustus, the Regia and the Vesta Atrium amongst others.

With weary feet but a very much enhanced knowledge of these key early areas of Roman life, we returned to the BSR for an informative lecture given by Eloisa Dodero on the history of the Capitoline Museums. It was these very museums that we would visit the following day…