The Secrets of Saqqara Tomb (no spoilers)

In April this year, I watched a documentary on the recent excavations at the Bubasteion Necropolis in the Giza desert. The film follows the 2019 excavation season of  Egyptologist Mohammad Mohammad Yousef and his team as they uncover the tomb of Wahyte, a high-ranking priest who lived around 4500 years ago.  Recording the highs, lows, logistics and passions of an archaeological excavation, this documentary is worth making the time for.

Before I get into the details of my experience with this film (no spoilers), first we must have some disclaimers. Firstly this program features human and animal remains in skeletal and mummified forms, so be aware of this if you are sensitive to such material. Secondly, as someone who has (albeit begrudgingly) worked on many historic TV shows and series over the years, it is important to remember that what you see on the screen is really a snapshot of what goes on. These excavations take months and documentaries are carefully edited to make the program both informative and enjoyable. This does not mean it isn’t accurate, but it does mean that just because you don’t see every element of the excavation, it doesn’t mean it does not happen. Exciting finds, for example, will be “rediscovered” for the camera to record the moment (very few people have the money to have cameras everywhere at all times and always running…) and the effort of recording, photographing, writing context sheets and drawing sections and plans is often edited out. So we must take such things with a pinch of salt and remember that although there will be some dramatisation, we shouldn’t let this diminish the wonderful and honest portrayal of these skilled specialists’ work.

With preliminaries out of the way, this film is, in my opinion, an excellent portrayal of the importance of archaeology, classical studies and heritage preservation. Most importantly, there is a running theme throughout the program, reminding the viewer that knowledge and the greater understanding of our heritage, is more important than the reported (and often better received) treasures – even when those treasures are breathtakingly beautiful.

The film begins by introducing the team who will be excavating an area of the Bubasteion Necropolis in Saqqara:

Saqqara is located 18 miles from Cairo, Egypt and served as an ancient burial ground for Memphis – the capital city in Egypt’s ancient past. It is famous for its stepped pyramid – the tomb of Djoser – but the area is home to a much larger quantity of different funerary monuments, many of which belong to the elites of Egypt from the first dynasty (c. 2900 – 2649 BCE) and through the following 3000 years after.

Dr Farang’s team recently (2018) discovered the remains of a beautifully preserved tomb of an elite priest named Wahtye, built around 2415–2405 BCE (at least 4,435 years ago). Alongside the diversity of 3100 artefacts found which ranged from 1500-4500 years old,  the documentary tracks the discovery of Wahtye’s large, rectangular tomb and the riddles held within. The walls are all amazingly preserved in the aridity and are decorated with epigraphic hieroglyphs, painted statues and carved frescos of scenes from the afterlife.

The importance of a thematic approach to excavation is well explained, specifically through the decision to fully understand the tomb’s entrance hall before excavating the sand shafts – which typically lead down to the burial chamber(s). The narration leads the viewer through the team’s daily experiences from individual commitment to global academic passion, and does so whilst balancing the logistics and risk assessments required to excavate such fragile, ancient material in sand-based spaces. This juxtaposition of personal and professional moments creates a potent overall narrative that both familiarises the viewer with the skills, hopes and exuberance of each member of the team, whilst purveying a brutal honesty about the mistakes and disappointments that can occur during the complexities of an archaeological project with high pressures and diminishing finances.

The mixture of sweeping camera angles, beautiful photography, digital animations and well-considered monologues makes this documentary well worth every minute it runs. A final note marks the cohesive respect between the modern team and the ancient gods they are uncovering, acting as an important and stark reminder of how it pays to listen and learn from both the past and the present.

Conclusively, this all-Egyptian team of specialists, generational-protectors and local labourers shows the world how important it is to not judge a book by its cover, whether that story is one of the dead, or of the living. 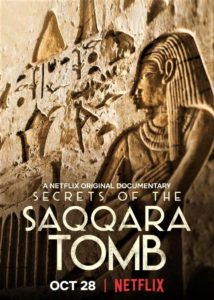 Trailer: Secrets of the Saqqara Tomb
3D Model of Wahtye’s Tomb: Inside the Tomb